Witness Dragoslav Trisic, former assistant to the Bratunac Brigade commander for logistics, claims the "fuel for the entire transportation of Muslims" from Potocari on 12 and 13 July 1995 "was provided by the UNPROFOR Dutch Battalion." 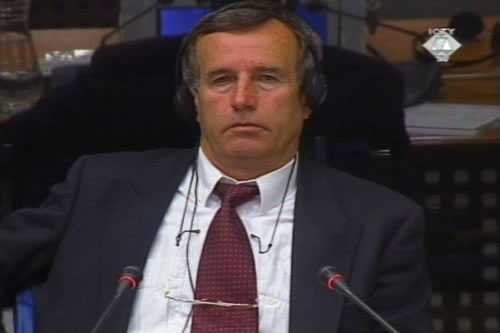 Trisic described Blagojevic as a "good, extremely respected, communicative, responsible commander who never hid behind others and issued clear and precise orders." He confirmed, too, that Blagojevic was "well informed," and that if superior officers, such as General Mladic or General Krstic, issued an order, he would carry it out "because his career depended on it."

The prosecutor managed to draw the witness into giving these compliments to challenge the defense’s arguments that Blagojevic was not really involved in his job, had no authority, did not hold the reins of command in his hands and was always trying to avoid meeting his superiors, such as Generals Mladic and Krstic.

In cross-examination, the prosecution focused in particular on the part of Trisic's testimony yesterday where, in answer to defense questions, he spoke about the "huge quantities of diesel" that were entered in the records of the Bratunac Brigade the day after the fall of Srebrenica, 12 July 1995. Most of it, as much as 30,000 liters, was obtained from the UNPROFOR Dutch Battalion, which was supposed to be protecting the "safe haven" of Srebrenica.

When asked by the prosecutor what the enormous quantities of fuel were used for, the witness responded that the Dutch diesel was "not used for combat operations" but to "transport the Muslims" from the enclave to territories controlled by the BH Army. "Transportation" is defined in the indictment against Vidoje Blagojevic and Dragan Jokic as the deportation or forcible transfer of about 25,000 Bosniak women, children and elderly from the Srebrenica enclave.

The prosecutor wanted to know whether the diesel fuel in the Bratunac Brigade’s records was used for some other purpose, such as the transportation of several thousand captured men to detention and execution sites. The prosecutor noted that in the records “there is no data about the filling up of tanks in the 1½-kilometer long convoy of buses in which thousands of Bosniak men were taken from Bratunac towards Zvornik to be executed on 14 July."

The witness replied that he did not know anything about the convoy and that the distribution of fuel was in the jurisdiction of the Drina Corps and the officers from the corps command. He said all he and his associates in the Bratunac Brigade had to do was "record the incoming and outgoing fuel," which they did "properly."