INTERVIEW WITH A MUJAHID IN BOSNIA 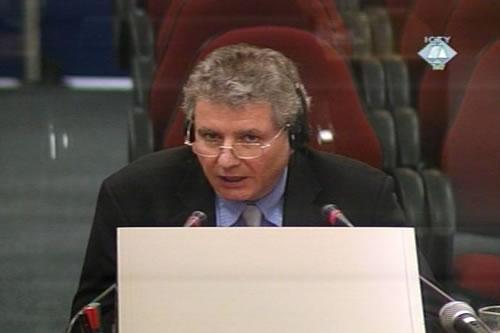 Andrew-Hogg, witness at the Hadzihasanovic and Kubura trial
Andrew Hogg, reporter for the British Sunday Times, interviewed a mujahid in Bosnia in the summer of 1992 and testified about it today at the trial of the former commanders of the BH Army in Central Bosnia--both accused of crimes committed by foreign fighters.

After reporting from the Middle East and on his encounters with the mujahedin in Afghanistan, Hogg went to Bosnia in August 1992 to find out why the mujahedin went there to fight. In the village of Mehurici near Travnik, he encountered a group of foreign fighters. One of them, who said his name was Abdel Aziz and who spoke English, told him--"very shortly, but kindly"--that if he wanted an interview, he would need to get permission from the BH Army.

The next day the reporter returned with the Travnik command’s permission and spoke with Abdel Aziz on a meadow, guarded by armed foreign fighters. He claimed he was the leader of the mujahedin in Bosnia. Hogg did not present any details from the interview at trial. Prosecutor Darryl Mundis had the audio recording and the transcript admitted into evidence. However, in the transcript shown in court, Abdel Aziz says that "his people did not come here through any official organizations" but on their own initiative to help after they heard that "Muslims were being killed." According to the transcript, Abdel Aziz said that the mujahedin in Bosnia do not play the leading role and that they do not want to have their own front but are under "the leadership and control of the Muslim forces."

“Aziz refused to say where he was from,” Hogg testified. “He wore wide trousers, a tunic and a military coat and looked like the mujahedin from Afghanistan…, but it seemed to me that he might be from Saudi Arabia." The witness says that Aziz's hair and beard were hennaed. "In Afghanistan, I learned that this was the sign that the mujahid is ready to die in battle" and that he "wants to look his best for the encounter with Allah."

The witness reported from Bosnia on several occasions after that period. In April 1993, he visited the village of Miletici, where he heard several captured Croats had been killed. On the floor of the house he visited, he saw "a bowl with blood and a ladle" and "blood and wax mixed on the floor." Hogg never wrote a report about what he found in Miletici because other events took precedence: the conflict in Mostar broke out.