Former deputy commander of the UN British Battalion in Central Bosnia thinks that the BH Army 3rd Corps used the mujahedin as a special weapon in "psychological warfare" to intimidate the opponent and affect this "will to fight." Colonel Watters states this was the "most intelligent way to fight." 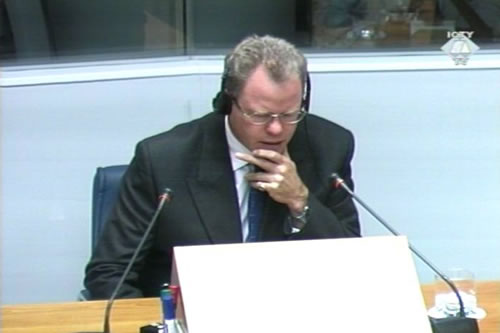 Bryan Watters, witness at the Hadzihasanovic and Kubura trial
British colonel Bryan Watters testified three times over the past few years at trials of HVO political and military leaders and troops accused of crimes against the Bosniak population in the Lasva valley in 1993. At the time of the crimes, Colonel Watters was the deputy commander of the UN British Battalion stationed in Central Bosnia.

Appearing for the fourth time before the Tribunal as a prosecution witness, Watters spoke about the "other side of the coin" in the Croat-Muslim conflict in 1993: crimes prosecutors say were committed against Croat and Serb civilians by BH Army members and the so-called mujahedin. The then-commanders of the 3rd Corps and the 7th Muslim brigade, General Enver Hadzihasanovic and Brigadier Amir Kubura, have been charged with command responsibility for these crimes.

In the estimate of the British colonel, Enver Hadzihasanovic was an "intelligent and capable officer and a better military commander than his Croat opposite number, Tihomir Blaskic," who was the commander of all HVO forces in the Central Bosnia Operative Zone at the time.

Some of the most serious crimes listed in the indictment against Hadzihasanovic and Kubura were committed by the mujahedin. The prosecution is trying to prove that the mujahedin were part of the 7th Muslim Brigade under the command and control of the 3rd Corps. Watters testified that the mujahedin were stationed in Zenica. Unlike other units, they were a "maneuver-type brigade," used to carry out attacks in accordance with orders coming from corps headquarters.

According to Watters, in addition to fighters from Islamic countries, there were BH citizens among the mujahedin. They were characterized by their "strict interpretation of the Koran." They had the reputation of "committed fighters" who "believed in their cause," which – with their political differences and extremist behavior – set them apart from the majority of 3rd Corps personnel. Often, there were clashes between the two.

It is interesting to note that the British Colonel said the 3rd Corps used the mujahedin as a kind of a special weapon in "psychological warfare" to intimidate the opponent and affect his "will to fight." To this end, there were rumors that the mujahedin were holding many positions in Central Bosnia, although, in Watters's estimate, they could not have been everywhere. The British colonel stated that this was the "most intelligent way to fight."

During the cross-examination of Colonel Watters, Sarajevo defense lawyer Edina Residovic emphasized "facts from the evidence" pointing out that the mujahedin were not under the command of the 3rd Corps and that General Hadzihasanovic had taken necessary and reasonable measures to solve the problem of foreign fighters. She quoted, among other things, from a document showing that on 13 June 1993, Hadzihasanovic informed the BH Army Command that there was a "group of foreign nationals and local Bosniaks who are not part of the BH Army and who conduct operations in contravention of the laws and customs of war." Hadzihasanovic demanded that the problem be solved, not wanting to bear responsibility for their actions and warning that attempts to disarm the mujahedin would mean the opening of a third front.

Colonel Watters replied that on the basis of those facts, one could conclude that Hadzihasanovic did indeed take measures to solve the mujahedin issue.

In re-direct, the prosecutor asked the British colonel if in the first half of 1993, the BH Army had the military wherewithal to fight the few mujahedin there were. Watters responded that the Army did have the "physical capability" to do so, but that such a development would have led to a breach with the Muslim population, inflicting considerable damage to the Army in moral terms. Had they started such an engagement, the British colonel concluded, "another front would have been opened," in addition to the existing fronts with the Bosnian Croats and Serbs, "since among the mujahedin, there were local Bosniaks, not only foreign fighters."