UNCHR INVESTIGATED THE CRIME IN MALJINE

A former field officer of the UN Center for Human Rights (UNCHR) who had been gathering information about a mass execution of Croat prisoners near the village of Maljine testifies that the deputy commander of the BH Army 3rd Corps refused to facilitate his visit to the crime scene, rejecting the possibility that such a crime had occurred. 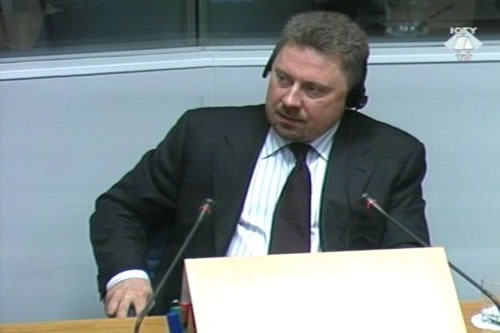 Former member of UN Human Rights Center, witness at the Hadzihasanovic and Kubura trial
A former field officer of the UN Center for Human Rights who had been gathering information about a mass execution of Croat prisoners near the village of Maljine testified that the deputy commander of the BH Army 3rd Corps refused to facilitate his visit to the crime scene, rejecting the possibility that such a crime occurred.

It was at the trial of the former commander of the 3rd Corps, Enver Hadzihasanovic, and the former commander of the 7th Muslim Brigade, Amir Kubura, that the UNCHR witness – whose identity was protected – stated that he began the investigation after talking to a surviving witness of the crime. According to the indictment, the killing of about 25 captured soldiers and civilians was carried out on 8 June 1993, after the BH Army captured Croats from the village of Maljine. Eye-witnesses have testified that the crime was committed by the mujahedin.

In September that year, the witness met with the deputy commander of the 3rd Corps, Dzemo Merdan, in order to get help for a visit to the crime scene. Merdan, however, did not give him a pass for the checkpoints. "He told me that he knew about the allegations that a crime had been committed, but that nothing of the sort had happened," the witness said.

The UNCHR member managed to reach the crime scene a few days later. All he saw there was a mound of relatively freshly dug soil.

After his visit, however, he did write a report that was sent to the UNCHR headquarters in Geneva. The UN special rapporteur for human rights at the time, Tadeusz Mazowiecki, included the information in his letter to Alija Izetbegovic, turning his attention to allegations of crimes in Central Bosnia.

In his report, the witness included the information obtained about the foreign fighters – the mujahedin – whom, he states, he personally saw during his visit to Guca Gora. He says the mujahedin were a "constant topic" among the international forces in BH. In his conversation with Merdan, the witness raised the issue of the mujahedin, and Merdan, he said, did not deny their presence: “He said that they were volunteers, that they fought in his army and that they obeyed the orders.”

At the trial of Hadzihasanovic and Kubura, prosecutors are trying to prove that the foreign fighters were part of the 7th Muslim Brigade and the 3rd Corps, while the defense claims they were not under the control of the accused.