Former ECMM monitor testifies at the trial of former BH Army commanders in Central Bosnia that in November 1993, the streets of Vares "were full of people trying to loot and the roads leading from Vares were full of soldiers and civilians loaded with things they had looted." 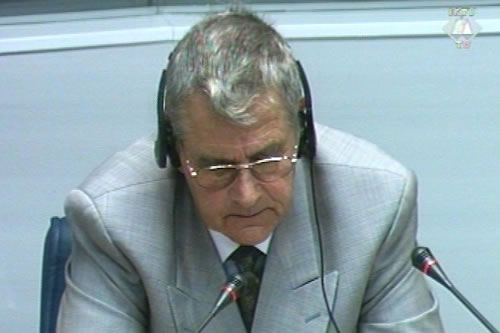 Ralf Wekesser, witness at the Hadzihasanovic and Kubura trial
The town of Vares was a "strange sight" on 8 November 1993 after BH Army troops took control of it, testified Ralf Wekesser, former monitor of the ECMM (European Community Monitoring Mission). He was speaking at the trial of the former BH Army commanders in Central Bosnia. "The streets were full of people trying to loot and the roads leading from Vares were full of soldiers and civilians loaded with the things they had looted.”

“I remember clearly a grotesque scene – a soldier carrying a Kalashnikov on one shoulder and a vacuum cleaner on the other," Wekesser added. As an ECMM team leader, he patrolled the area from Vares to Zavidovici between September and December 1993. He stated that Vares was a quiet town until the HVO attack in late October 1993 and the massacre in Stupni Do. The BH Army then launched an offensive and the HVO and Croatian population withdrew from the town.

The indictment alleges that the 7th Muslim Brigade, commanded by the accused Amir Kubura, was responsible for the plunder and destruction of property in Vares. The brigade belonged to the BH Army 3rd Corps, commanded by the other accused, Enver Hadzihasanovic.

Wekesser says that "no one told him" the 7th Muslim Brigade had entered Vares on 4 November, but he reached that conclusion himself based on the appearance of the soldiers he saw there.

Kubura’s defense claims that 7th Muslim Brigade troops were ordered to leave Vares on 5 November. The witness accepted this possibility, stating that the soldiers he saw looting the town on 8 November "did not look like the ones who had taken control of Vares" a few days before.