The first defense witness at the trial of Vidoje Blagojevic and Dragan Jokic, former VRS commanders accused of the massacre in Srebrenica, denies that there were any forced transfers of civilians from Potocari but does not challenge the fact that several thousand Bosniak men were killed in July 1995. 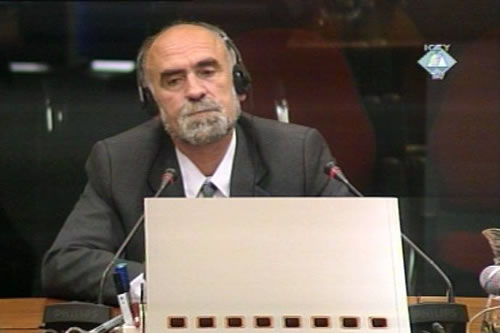 Ljubisav Simic, witness at the Vidoje Blagojevic and Dragan Jokic trial
“I am ashamed. This thing that someone did did not bring any good to us or to Bosniaks. It brought us shame and it brought Bosniaks anguish, suffering for their lost ones.”

This is how Ljubisav Simic, former president of the Bratunac municipality, summed up the effects of the July 1995 Srebrenica massacre on both ethnic communities in eastern Bosnia. Simic is the first defense witness called by Vidoje Blagojevic, former commander of the VRS Bratunac Brigade. He is on trial, together with Dragan Jokic, former engineer corps chief in the Zvornik Brigade, for crimes committed after the fall of Srebrenica.

On 12 July 1995, Ljubisav Simic took part in a meeting at Hotel Fontana in Bratunac, where General Ratko Mladic – in the presence of the UN Dutch Battalion commander – put before the representatives of civilians from Srebrenica the choice "to survive or disappear." Although he states that Mladic should not have "used that phrase" and that his "raised voice was not necessary," Simic claims that the representatives of the Bosniak civilians were offered the choice: to stay in Srebrenica or be evacuated to territory controlled by the BH Army, to Serbia (or rather, the Federal Republic of Yugoslavia) or to "a third country." Bosniak representatives, Simic claims, insisted that they be allowed to leave the enclave, and later in Potocari, they all fought to be the first to board the buses.

The evacuation of more than 25,000 civilians, most of them women and children, on 12 and 13 July 1995 from Potocari cannot, in Simic's opinion, be considered a deportation or forcible transfer as it has been qualified in the indictment. The witness claims that "he did not get the impression that anyone was forcing anyone to board the buses." He believes that "they left because life in Srebrenica was hard." Although he was a member of the SDS, Simic did not hear about the directive issued in March 1995 by his president, Radovan Karadzic, that for the inhabitants of Srebrenica and Zepa, "lives should be made unbearable." He does not know anything about the blocking of humanitarian aid convoys destined for the enclaves besieged by the VRS and nominally protected by the UN.

The first defense witness claims he never heard that Vidoje Blagojevic had played any role in crimes committed after the fall of the enclave and claims that in Bratunac, there is widespread belief that he was indicted "only because he happened to be the brigade commander at the time the events took place.”

When asked by the prosecutor whether he knew how many people were killed in the events, Ljubisav Simic answered that "he heard the figure of seven, perhaps even more, thousand people."