SECOND HALF TO BEGIN AT THE SECOND SREBRENICA TRIAL

The defense case for the Tribunal’s second Srebrenica trial is set to begin next week and continue until the end of July. Blagojevic and Jokic are acquitted on some counts alleging their individual responsibility for crimes committed there. 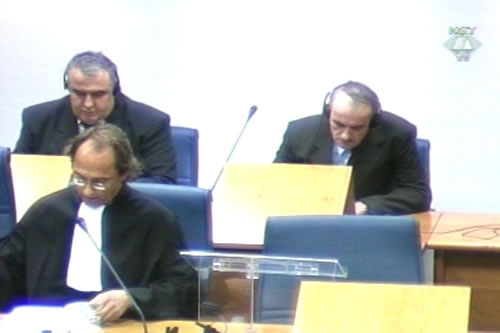 Dragan Jokic i Vidoje Blagojevic in the courtroom
On Wednesday, 14 April, defense lawyers will begin presenting their evidence at the trial of Vidoje Blagojevic, former commander of the Bratunac Brigade of the VRS, and Dragan Jokic, former Engineer Corps Chief of the Zvornik Brigade. Their case should end by the Tribunal's summer recess. Blagojevic has been granted 11 weeks to present his case and Jokic four.

The task of defense lawyers for the two VRS officers, who are accused of crimes committed in Srebrenica in July 1995, was made a bit easier today when the Trial Chamber published its judgment acquitting the pair of "planning, instigating and ordering" the crimes of extermination, murder, persecution and inhumane acts. Their personal responsibility is now limited to "aiding and abetting" in the planning, ordering and committing of the crimes. Their "command responsibility" – failing to prevent or punish their subordinates who had committed the crimes-- remains.

Vidoje Blagojevic also has to defend himself against Count 1 of the indictment--complicity in genocide. In the judgment published today, the Chamber stated that the prosecution had presented sufficient evidence to indicate that – unless the defense successfully challenges it in court – genocide had been committed in Srebrenica and that Blagojevic was an accomplice in the crime.

SENSE has learned that the prosecution is currently considering whether to appeal the judgment of the Trial Chamber, delivered at half-time--after the prosecution rested its case and before the beginning of the defense case.

At a pre-defense conference, Michael Karnavas, an American of Greek origin who is Vidoje Blagojevic’s lawyer, announced that he would be calling 76 witnesses; he would have depositions for about thirty of them. Branko Lukic, Dragan Jokic’s lawyer from Doboj, did not specify the number of witnesses he intends to call in the four weeks allotted to him.

The prosecutor wanted to know whether the two accused intend to take the witness stand in their defense, but their defense lawyers stated that it was still too early to decide. Vidoje Blagojevic, however, opposed that statement. He took the opportunity at the hearing today to once again distance himself from his defense counsel, calling him a "person foisted on me as my defense counsel" and accusing him of "manipulations” and "confusion." Blagojevic stated he was ready to testify under oath and to say "what he knows and how things are." In that case, Blagojevic would have to be cross-examined by the prosecutor, but it seems it would be a much bigger problem for him to answer questions asked by the "person foisted on him as his defense counsel."

Before the beginning of the trial, Blagojevic tried to have Karnavas replaced with another lawyer, but his requests were rejected first by the Registry, then by the Trial Chamber, and finally by the Appeals Chamber; they all concluded that the accused failed to present "justified and valid reasons" for the replacement of his defense counsel.