WITNESSES FROM THE "OTHER SIDE" 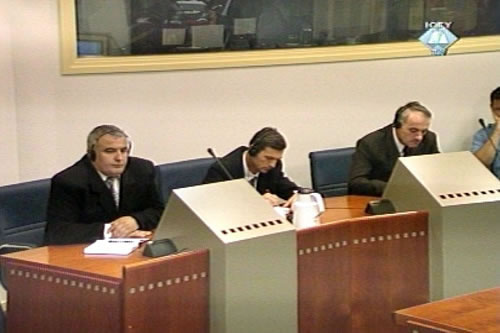 At the Krstic trial, in 2000 and 2001, the prosecution reconstructed the events in Srebrenica in July 1995 mostly through the testimony of the victims: the deported women and children and the men who survived the executions by mere chance.

These events were reconstructed at the trial of Colonel Blagojevic and Major Jokic to a large extent through witnesses from the "other side". Most of the prosecution witnesses this time were members of the Republika Srpska army and police, those who participated in the summer of 1995 in the attack on the safe haven of Srebrenica, the capture and detention of Bosniak men and their eventual execution and burial in mass graves.

Unlike the first "Srebrenica trial", where the prosecution could count on the testimony of only one "penitent" – former member of the 10th Sabotage Detachment of the VRS, Drazen Erdemovic, who had pled guilty for his participation in the execution of more than a thousand Bosniak men at the Branjevo farm on 16 July 1995 – this time the prosecution, in addition to Erdemovic had at their disposal another three accused who decided to speak out about the events in Srebrenica and their role therein. Two of them – Momir Nikolic and Dragan Obrenovic – were on the same indictment as Blagojevic and Jokic – and had taken direct part in the event described in it. The third one, Miroslav Deronjic, was charged with a crime committed in 1992, but he played an important role in Srebrenica, as in July 1995 he was the "commissioner for civil affairs”, appointed personally by Karadzic.

In addition to the four "penitents", another twenty-odd VRS officers and soldiers appeared before the court in the course of the prosecution case. They had all taken part in the "manhunt", capture and detention of Bosniak men. There were also truck drivers who first transported prisoners and then their bodies, as well as heavy machinery operators who dug out and covered the mass graves and later participated in the secret operation to hide the evidence of the crime: digging out of the "primary" mass graves and removal of their contents to the so-called "secondary" graves located on rugged terrain.

Most of the witnesses gave testimony with protective measures – their identities and faces were not made public – but some of them agreed to testify in open court and say what they did in the summer of 1995 in Srebrenica. Some of them claim they saw, heard and did no evil, that they "do not know" or "do not recollect"… but some decided to bring the dark secrets that have been tormenting them for more than eight years out in the open. Some showed up although they have the status of the accused and face punishment. They nevertheless decided to testify without any protective measures and say all they knew. Others tried to say as little as they could, denying even those things they could freely have admitted. By denying having taken part in the separation of men from women and children in Potocari – which is a perfectly legitimate military action in such circumstances – they showed that this was not done in order to separate prisoners of war from the rest of the population, but for another more sinister goal, which they are aware of and which they therefore decided not to speak about.

Apart from VRS members, the prosecution also put on the witness stand a former judge of the Supreme Military Court of the Republika Srpska, who is currently a prosecutor in the region to which Srebrenica belongs. He testified that in the last eight years he had not seen a single document indicating that any investigation into what had happened in July 1995 in Srebrenica had ever been launched.

The defence for Colonel Blagojevic and Major Jokic will begin presenting their case on 6 April 2004.