UNWILLING WITNESS FOR THE PROSECUTION

Former bodyguard of the accused Vidoje Blagojevic remembers little or nothing of the events in Srebrenica in July 1995. Compliments of the prosecution to the Republika Srpska authorities 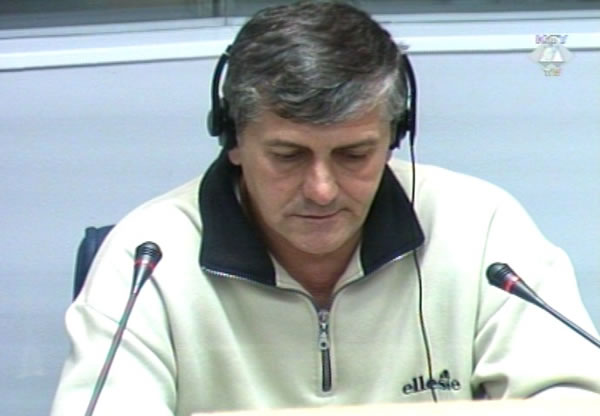 Krsto Simic, witness at the Vidoje Blagojevic and Dragan Jokic trial
In an unusual move for the Office of the Prosecutor, Peter McCloskey, prosecution team leader at the trial of the former VRS commanders accused of the massacre in Srebrenica, publicly praised the Republika Srpska authorities and their liaison officer with the Tribunal in The Hague.

At the end of the two-day testimony of Krsto Simic, truck driver who in July 1995 took part in the removal of the bodies of more than a thousand Bosniak men killed in a warehouse in Kravica and buried in a mass grave in Glogova, prosecutor McCloskey stood up in the courtroom and publicly thanked the Republika Srpska authorities and the local police on their cooperation in quickly locating witnesses and bringing them to The Hague.

He was referring to several witnesses that will be called to the witness stand at a later date, since the prosecutors had learned of their existence only recently – probably from some ex-VRS officers who pleaded guilty and agreed to cooperate with the prosecution.

Following Krsto Simic’s testimony, a former bodyguard of Vidoje Blagojevic appeared before the court. Unlike Simic, who waived his right to protective measures and agreed to testify without his legal counsel, although the prosecution treats him as a suspect, former Blagojevic's bodyguard testified with protected identity and appearance, as witness P-210.

He testified about the movements of the accused Blagojevic, former commander of the Bratunac brigade of the VRS, on the day when Srebrenica fell, 11 July 1995, and in the subsequent days when mass executions of the captured Bosniaks were carried out in the area of responsibility of the Bratunac brigade. He claimed that on 11 July 1995 he escorted the commander en route from Bratunac to the forward command post of the Drina Corps on the Pribicevac hill. According to him, on that day and on the subsequent days they did not pass through Srebrenica. As far as witness is able to recall, on any of those days they did not pass through any of the locations in the Srebrenica enclave where the events described in the indictment against Blagojevic and Jokic took place.

The witness says he went to the school, relayed the orders to the police and "saw that everything was all right." The next morning he reported what he saw to Commander Blagojevic.

The witness concluded that "everything was all right", as he said, although he had not seen any of the prisoners, since he had never entered the gym where they were held. He does not know how many of them were detained there or what happened to them afterwards. He "heard" that they were "taken away, but he did not know where." He claims that he never discussed the fate of those people with Commander Blagojevic.

According to the indictment and the testimony of the few survivors, the elementary school gym was one of the make-shift "detention centres" in Bratunac where several thousand Bosniak men captured after the fall of Srebrenica were held. From these "centres" they were taken to various execution sites in the vicinity of Bratunac and Zvornik. The witness says that he saw buses "driving down the road" and that as far as he remembers, "there were quite a few men", but he does not know where they went. He does not know how many men were killed in Srebrenica in July 1995. He does not even know whether "any killings took place at all" there.

Unlike Krsto Simic, who brought out in a painful testimony the secrets he had kept inside him for more than eight years, former Blagojevic's bodyguard who came to The Hague as an unwilling witness of the prosecution seemingly decided that the best thing for him was to "forget about it all."