The conclusion of the military information summary of the British Battalion for 23 June 1993, states that the mujahedin “are under effective control, as they are invariably found at the point of the [BH Army] 3rd Corps main effort.” The prosecutor presented this document today at the trial of the former BH Army commanders in Central Bosnia. 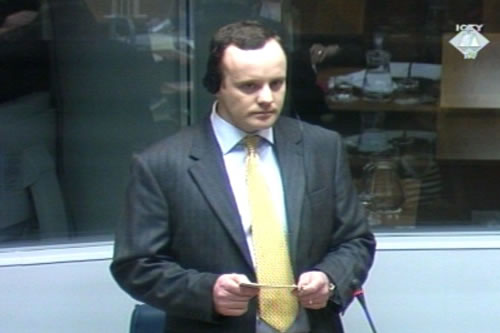 Cameron Kaggell, witness at the Hadzihasanovic and Kubura trial
The UNPROFOR British Battalion in Central Bosnia considered the mujahedin to be "under effective control" of the BH Army, as evidenced by a military information summary (MILINFOSUM) shown today by the prosecutor at the trial of the former BH Army commanders in Central Bosnia

The conclusion of the daily military information summary by the British Battalion dated 23 June 1993 states that the mujahedin "are under effective control as they are invariably found at the point of the 3. corps main effort. The recent campaing in Bila valey clearly demonstrated this.“

Captain Cameron Kaggell, who was the liaison officer between BritBat and the 3rd Corps at the time, confirmed the authenticity of the document. “We have been discussing whether they [the mujahedin] were under effective control" and the consclusion was that "as elite troops they were used to fight the war effectively where they were needed”, the witness said

“They were seen to be more committed, more determined, more curageous in fighting the war for their fellow muslim brothers. Therefore it made good military sense to use the more effective troops in where they needed to capture the more important ground,” the witness said.

In an effort to pre-empt the defense argument that Hadzihasanovic did not control or condone the conduct of the foreign troops, prosecutor Ekkerhard Withopf quoted another conclusion from the information summary: "The labeling of them [mujahedin] as uncontrollable becomes a convenient means of deflecting criticism away from 3. corps while still utilizing their proven tactical worth. In this context, Hadzihasanovic’s letter to his superior command requesting permission to deal with the problem might be regarded as rhetoric.”

The witness noted that this conclusion "would confirm what was happening at the time" in the field.

The defense challenged the admissibility of the document stating that this in effect constituted hear-say evidence, in that the witness was making comments on conclusions made by someone else, while the prosecutor submitted that the conclusions of the British Battalion constituted credible evidence when corroborated by a witness who had first-hand information about the debatable issues.

Despite the defense objections, the Trial Chamber admitted the document into evidence, noting that it would eventually decide on what weight to give it.