MUJAHEDIN WERE NOT LIKED

The commanders of the 3rd Corps of the BH Army did not like the mujahedin, but they were their superiors--so concludes Sir Martin Garrod, former British member of the ECMM. 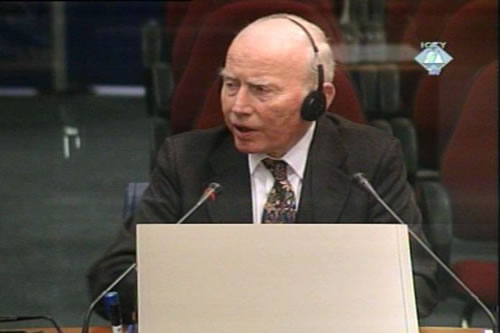 Martin Garrod, witness at the Mladen Naletili "Tuta" i Vinko Martinovic "Stela" trial
It was "quite clear" that Enver Hadzihasanovic did not like the mujahedin, but they did seem to be under his control. This is according to Sir Martin Garrod, former member of the European Community Monitoring Mission (ECMM) in Central Bosnia, who testified at the trial of Hadzihasanovic, former commander of the BH Army 3rd Corps, and Brigadier Amir Kubura, the commander of the 7th Muslim Brigade.

This is the third time that Garrod has been called as a prosecution witness before the Tribunal. He has previously testified in the Kordic and Cerkez case and in the Tuta and Stela case. This time the prosecution called him to present his knowledge of the chain of command and the role of foreign fighters in the BH Army 3rd Corps.

“It was always my conclusion that the mujahedin were theoretically under the command of the 3rd Corps," Garrod said, adding that the police chief in Zenica confirmed that to him directly. The prosecution has charged Hadzihasanovic and Kubura with the crimes committed by the mujahedin in Central Bosnia precisely because, in their view, the foreign fighters were part of the 3rd Corps and the 7th Muslim Brigade.

Garrod describes Hadzihasanovic, whom he met on several occasions, as a "great professional, always open and direct." The prosecutor wanted to know whether a commander who was such a professional would have been well informed about events in the field. "He always left the impression that he was informed about what was happening in his area of responsibility," said the witness.

The assessments of the witness are relevant for the allegation in the indictment that Hadzihasanovic, as corps commander, "knew or had reason to know" about the acts of his subordinate soldiers and that he had to prevent or punish them, which he failed to do.

Defense lawyers for the accused decided to postpone their cross-examination of Sir Martin Garrod.