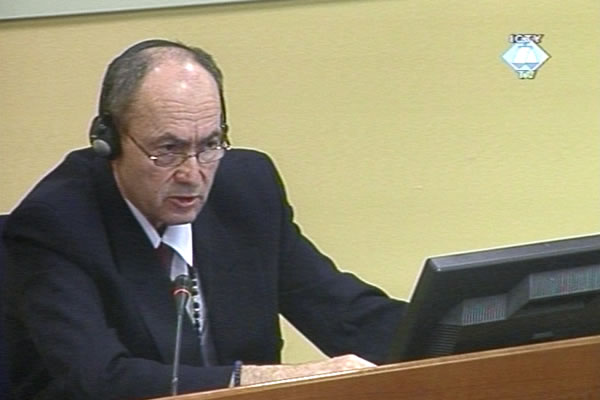 Zdravko Tolimir in the courtroom
Zdravko Tolimir has until Friday, 4 July 2008, to decide and inform the ICTY Registry if he agrees to receive documents in Latin script and in BCS disclosed to him by the prosecution. If he fails to do so, Tolimir will be denied the right to represent himself in court, pre-trial judge Kimberly Prost warned.

Since his arrival in the Hague General Tolimir has insisted that all documents be disclosed to him in Serbian language and in Cyrillic alphabet. He claims that he can’t read Latin script despite the fact that he graduated from top military schools in the JNA and trained abroad.

At the status conference today, Judge Prost stressed this was ‘the last warning and opportunity’ for the accused to avoid the assignment of defense counsel. The right to self-representation, the judge reminded the accused, is not absolute and could be revoked if the accused obstructs the proceedings. In Judge Prost's view, this is exactly what the accused ‘has persistently been doing for the past year’. The judge warned the accused he now had the opportunity to ‘put a stop to the obstruction’ and agree to receive the prosecution material before the Pre-Trial Chamber revokes his right to represent himself at the trial.

When the judge asked him the usual questions about his health and the conditions in detention, the accused tried to use the opportunity to ‘bless everyone in the courtroom’, to present ‘new facts about the arrest' he refers to as his ‘kidnapping’ and to readdress the issue of ‘language he doesn't understand’. The judge however stopped him, concluding that ‘it may be assumed the accused has no health problems’. Tolimir appeared before the court wearing a prayer rope with a large cross; before the hearing began he crossed himself.

Aleksandar Gajic, Tolimir's legal advisor, made an attempt to address the judge. She warned him with a smile that he had ‘no right to address the Chamber, except if he agrees to accept the prosecution material'.

Zdravko Tolimir, Ratko Mladic's assistant for intelligence and security, was arrested last year and is now awaiting trial for genocide and other crimes in Srebrenica and Zepa in the summer 1995.