Former Mladic’s assistant Zdravko Tolimir maintains he was ‘kidnapped’ in Belgrade and not arrested in Bosnia Herzegovina. Complaining that he is denied the right to take the special tea that lowers his blood pressure, Tolimir burst into tears at the status conference 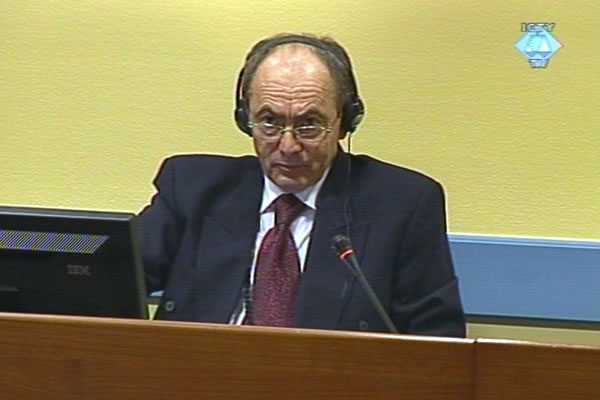 Zdravko Tolimir in the courtroom
Zdravko Tolimir still denies that he was arrested near Bratunac, in Bosnia and Herzegovina, on 31 may 2007, claiming he was in fact ‘kidnapped’ in Belgrade and transferred to The Hague. He faces charges of genocide and other crimes in Srebrenica and Zepa. At the status conference in his case Tolimir said that he managed to support this claim with ‘new facts’ he submitted in his latest motion to the Trial Chamber.

In mid-October the prosecution forwarded to the Trial Chamber a memo from the Serbian foreign office about the circumstances of Tolimir’s arrest. In the memo the Foreign Office relays the information received from the interior ministries of Serbia and Republika Srpska to the effect that Tolimir was arrested after the BH police launched a search for Ratko Mladic, on the way to the village of Sopotnik near Bratunac.

Tolimir claims the same interior minister that the Serbian foreign ministry refers to in its memo said on TV that the arrest was made in Belgrade. This is why Tolimir is challenging the authenticity of the memo. He has requested a copy because he wants to personally verify its ‘legality’. Tolimir’s request was granted. Tolimir’s motion was accompanied by a CD containing the statement he referred to.

Tolimir complained that his blood pressure was very high at the time of his arrest. When he came to the UN Detention Unit he managed to normalize it because he was taking a special tea brought to him by his wife. However, the right to have this tea has since been denied and this made him burst into tears today. Since Tolimir used the tea instead of medications, now he was left with no treatment for his medical problem. This prompted him to invoke the right of prisoners in the Detention Unit to have tea.

Apart from speaking about the circumstances of his arrest and his tea problem, Tolimir repeated that he wanted to represent himself at the trial. He refused to see what adjudicated facts could be acceptable to both sides. ‘I want all accusations brought against me to be proven at my trial’, Tolimir said.