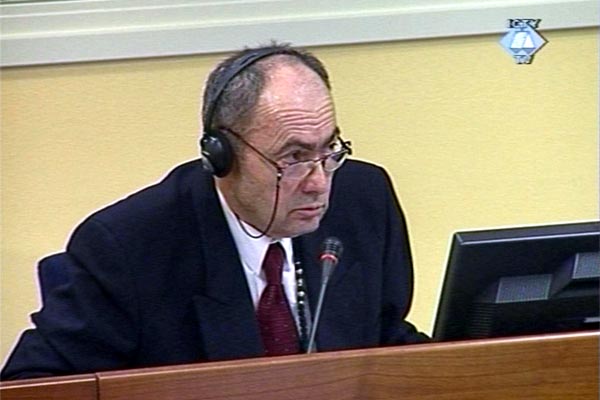 Zdravko Tolimir in the courtroom
At the status conference in the Zdravko Tolimir case in December 2008, pre-trial judge Kimberly Prost rejected Tolimir’s demand to receive documents in Cyrillic alphabet. Tolimir appealed against the decision, claiming that it violated his rights and caused difficulties in his preparations for the upcoming trial.

The Appeals Chamber announced its conclusion today, explaining that Judge Prost ‘interpreted both the law and the facts properly’ when she ruled that the ‘right of the accused to receive documents in a language he understood’ didn’t imply that he could ask for documents ‘in any language or in any script’. According to the Appeals Chamber, Judge Prost was correct in her conclusion that Tolimir understood Latin alphabet to a sufficient extent.

Judge Prost noted that Tolimir ‘was educated in schools in former Yugoslavia where Roman alphabet was taught’. In addition to this, at his initial appearance before the Tribunal, Tolimir stated that he ‘received a copy of the indictment in the language he understood’. The accused was able to prepare and submit preliminary objections to the indictment in Serbian language and the Latin script, which ‘clearly indicates that he has understood its contents’. According to the pre-trial judge, Tolimir was not ‘consistent in his explanations’ as to why he couldn’t read or understand Roman alphabet. Furthermore, the prosecution submitted documents in Roman script signed or received by the accused between 1992 and 1995.

On the other hand, Tolimir claims that his mother tongue is Serbian written in Cyrillic script; this is ‘only language I speak and understand’, he claims. He noted in his appeal that after he suffered a stroke he had to learn to read again, and he did it in Cyrillic. The Appeals Chamber found that the accused "provides no support for these assertions, which in any event, provide no indication that the appellant is unable to understand Serbian in Latin script’.

The indictment charges Tolimir with genocide and other crimes in Srebrenica and Zepa in the summer of 1995 while he was Mladic’s assistant in the VRS General Staff.