In the closing argument before the International Court of Justice, Croatia’s legal counsel Ivan Simonovic urges the highest world court to dismiss Serbia’s objection and declare it has jurisdiction to hear the case Zagreb brought against Belgrade for violations of the Genocide Convention 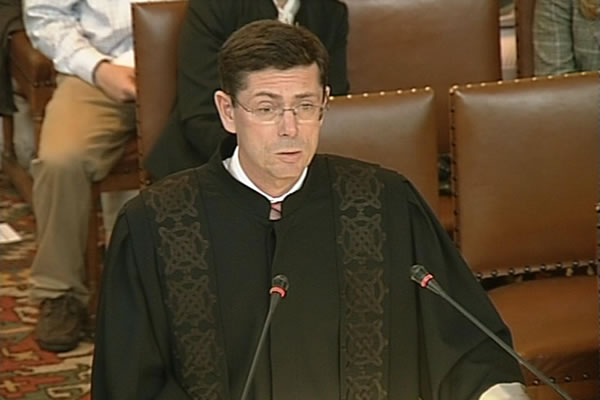 Ivan Simonovic, legal representative of Croatia
‘The issue of Serbia’s recourse to the International Court of Justice is of crucial importance for the Court’s decision on its jurisdiction;, says Croatia’s legal counsel Ivan Simonovic at the end of the five-day hearing on Serbia’s preliminary objections to the jurisdiction of the highest world court.

Serbia claims the Court lacks jurisdiction to hear the case brought in June 1999 by Croatia, demanding that the then Federal Republic of Yugoslavia be held responsible for the violations of the Convention of the Prevention and Punishment of the Crime of Genocide. Belgrade’s counsel argues the court lacks jurisdiction because Serbia was neither a member of the United Nations nor a signatory of the Statute of the International Court of Justice; it could therefore not be a party to any proceedings.

Croatia admits that between 1992 and 2000 it challenged FRY’s right to UN membership, but claims that during this period Belgrade had ‘a special and unique’ relationship with the world organization including ‘attributes of membership’ and recourse to the International Court of Justice. The fact that during this time Belgrade filed more than forty different documents – objections, applications or motions – corroborates this argument, Croatia's legal counsel argued.

Croatia’s counsel also quoted from a decision of the Serbian Supreme Court from February 2008, where the court found Serbia was ‘an internationally recognized country, a founding member of the United Nations’.

The court has so far had to rule seven times on its jurisdiction in the cases that involve the former Federal Republic of Yugoslavia, now Serbia. It found it lacked jurisdiction only once, in the case brought by the FRY in 1999 against NATO member states for ‘illegal use of force’. Professor Simonovic notes today the decision differs from the remaining six , in which the court confirmed its jurisdiction – because Slobodan Milosevic ‘abused procedure’, instituting the proceedings not to win the case but to use the decision on the lack of jurisdiction in the cases brought by BH and Croatia against his country. The decisions of the International Court of Justice are binding only for the parties, and do not constitute binding precedents for any future cases before it.

Simonovic urged the court to dismiss Serbia’s objection and to rule it has jurisdiction to hear the case brought by Croatia. Any other decision, Croatia’s legal counsel argues, would mean that previous decisions of the court, including the one rendered last year in the BH case, ‘might be seen by many as wrong’.

The court is expected to rule in the fall.