INTERNATIONAL COURT OF JUSTICE CONFIRMS IT HAS JURISDICTION IN CROATIA VS. SERBIA CASE

The world’s highest court has rejected preliminary objections raised by Belgrade regarding the jurisdiction and acceptability of the suit filed in 1999 by Croatia, accusing Serbia of violations of the Convention on the Prevention and Punishment of the Crime of Genocide 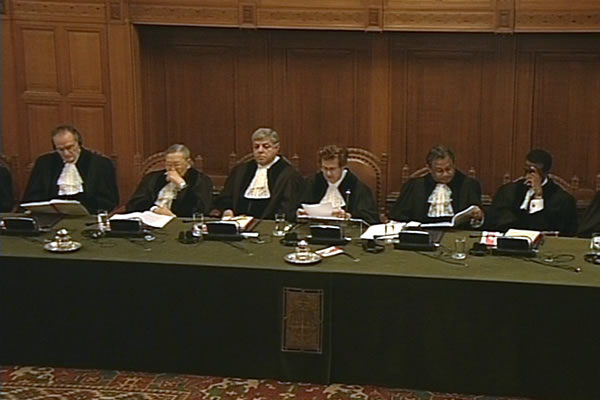 ICJ Trial chamber in the case brought by Croatia against Yugoslavia in 1999
The International Court of Justice rejected today Serbia’s preliminary objections to Croatia’s application against it. This has made it possible to hold the hearing on the merits of the case brought by Croatia in July 1999, for the then FR Yugoslavia be found responsible of the breaches of the Convention on the Prevention and Punishment of the Crime of Genocide in the course of the war in Croatia from 1991 to 1995.

Serbia responded to Croatia’s request with preliminary objections regarding the issue of jurisdiction of the court, acceptability of the litigation and some of Croatia’s other particular requests. In May 2008 there was a five-day hearing during which the parties delivered their argument and counterargument in relation to the objections in question.

In the judgment delivered today, the International Court of Justice rejected Serbia’s first and third objection by a majority of votes. The Court ruled that the second objection was ‘not preliminary in nature’, and decided it would rule on the matter at the hearing on the merits of the case.

Belgrade’s first objection was that at the time when Croatia filed the application against Serbia, the latter was not a UN member, was not a signatory of the Court Statute or a contracting party to the Genocide Convention. The International Court of Justice therefore lacked jurisdiction to consider Croatia’s application – was dismissed by a narrow margin - 10 against seven votes.

The second objection covered the issue of ‘temporal jurisdiction’ of the court. In essence, Belgrade considers that since Serbia was ‘was not a state’ before 27 April 1992, events that precede that date – when FR Yugoslavia came into existence as a federal state comprising two federal units, Serbia and Montenegro – could not be attributed to it. Ruling with 11 votes for and six votes against, the Court found that this objection was not of preliminary nature. It will be considered at the same time as the merits of the case.

In its third objection Serbia covered several requests stated in Croatia’s application. As Belgrade sees it, they are unacceptable as they extend beyond the framework of the Genocide Convention. Croatia requested that Serbia be obliged to prosecute and punish perpetrators of the genocide in Croatia, to deliver all available information about the fate of missing persons and to return cultural property taken – looted – from Croatia during the war. This objection was dismissed with 12 votes to five.

At the end of the two-hour reading of the judgment summary, the ICJ president Rosalyn Higgins announced that the parties would soon be informed about the deadlines for written submissions. As Serbia’s lead counsel – or agent – Tibor Varady said after the judgment was read out, Serbia will decide whether to file an application against Croatia for genocide against Serbs. On the other side, Croatia’s agent Ivo Simonovic – visibly satisfied – said that the ‘fourth quarter’ of the proceedings that began nine years ago might take another three years. Croatia’s legal team, Simonovic noted, will have to prepare its arguments and evidence well after the ICJ set ‘a truly high standard of proof for genocide’ in its judgment in the BH vs. Serbia case last year.

Croatia vs. Serbia is not the last case stemming from the break-up of the former Yugoslavia before the world’s highest court. At Serbia’s instigation, supported by the UN General Assembly, the International Court of Justice will give its ‘advisory opinion’ on the conformity of Kosovo’s independence with international law. Also, Macedonia has just filed an application against Greece after Greece blocked Macedonia’s admission into NATO. The International Court of Justice has also already delivered its judgment in the BH vs. Serbia case. However, when in 1999 Serbia filed an application against NATO member state for ‘illegal use of force’, the Court declared it lacked jurisdiction.