CROATIA AND BH ‘TWO SIDES OF THE SAME COIN’

As the hearing about the jurisdiction of the International Court of Justice in the Croatia vs. Serbia case continues, Zagreb’s legal counsel contend that there is no reason for the Court to rule differently than it ruled in the case brought before the Court by BH 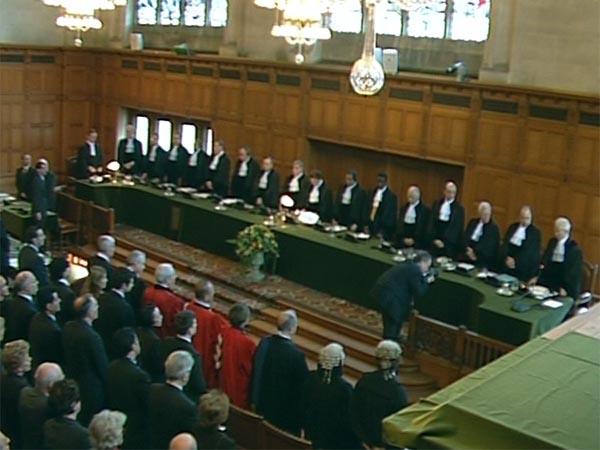 Courtroom in the international Court of Justice
‘Genocides in Croatia and in BH are two sides of the same coin’, Professor Ivan Simonovic, Croatia’s legal counsel, noted today before the International Court of Justice. As he sees it, it would be ‘odd, even bizarre, for the Court to rule one year it has jurisdiction, and the next year to decide it lacks jurisdiction to consider similar cases that went on two sides of the border’.

In reply to the arguments presented yesterday by Belgrade's legal counsel, Croatia’s legal representatives today pointed to the similarities between the Croatian case and the application filed before the world’s highest court by BH. In their arguments yesterday Belgrade’s legal counsel claimed the International Court of Justice lacked jurisdiction to adjudicate the case Croatia brought before it in June 1999 accusing the then FRY of violations of the Convention on the Prevention and Punishment of the Crime of Genocide.

The International Court of Justice concluded the proceedings instituted by BH in February 2007 with a judgment where the Court affirmed it had jurisdiction in the disputes about the application of the Genocide Convention, finding Serbia guilty of failure to prevent and punish the genocide in Srebrenica. In this preliminary phase of Croatia’s case in which only arguments relating to the matter of jurisdiction are presented, Zagreb’s legal counsel noted there was no reason for the Court to rule differently than it ruled in the BH case.

Croatia and Bosnia Herzegovina, Simonovic explained, ’are not only neighbors, they are also countries that share the same fate, victims of the same aggression whose aim was to take over a part of their territory to create a Greater Serbia’. Andreja Metelko-Zgombric, the second legal counsel representing Croatia, went on to say that both countries fell victim to the same forces under the same political leadership and the same military command, that used the same pattern on both sides of the border. The fact that these forces ’changed their names’ – Federal Republic of Yugoslavia, Serbia and Montenegro and Serbia at the end – according to Simonovic ‘cannot be the foundation for an attempt to evade responsibility’ for violations of the Genocide Convention.

British professor Philippe Sands, Croatia’s third legal counsel, contended today that the other party in the present case ‘was bound to act according to the Genocide Convention’ regardless of what it is called– FRY, Serbia and Montenegro or just Serbia – during the whole course of the war in the former Yugoslavia. Serbia’s legal representatives yesterday stressed that the FRY acceded to the Convention in March 2001; it also placed reservations on Article 9, not accepting the automatic jurisdiction of the International Court in cases relating to the application of the Genocide Convention. Professor Sands noted that it ‘occurred’ to Belgrade to accede to the Convention six days after Croatia submitted its memorial to the International Court of Justice. ‘Belated reservations on Article 9 placed in March 2001’, Sands contends, ‘cannot be applied retroactively’.