SERBIA: NO GENOCIDE IN CROATIA

At the opening of the preliminary hearing in the Croatia vs. Serbia case, Belgrade’s legal representatives claim the crimes in Croatia cannot be qualified as genocide and challenge the jurisdiction of the International Court of Justice in the case Croatia brought before the Court asking it to find Serbia responsible for the violation of the Genocide Convention 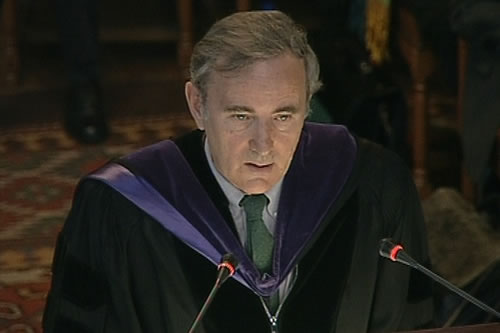 Tibor Varady, chief legal representative of Srbija and Montenegro
During the war in Croatia from 1991 to 1995 there were crimes but they never reached the proportions of genocide, Tibor Varady, Belgrade’s legal counsel, said today before the International Court of Justice at the opening of a five-day hearing in the Croatia vs. Serbia case. Since there was no genocide, Varady continued, ‘the key prerequisite for the jurisdiction of the International Court of Justice has not been met’. Croatia instituted proceedings against Serbia in 1999, demanding that the then FR Yugoslavia, now Serbia, be found responsible for the violations of the Convention on the Prevention and Punishment of Genocide.

According to the Belgrade’s legal counsel, what happened during the war in Croatia cannot be seen as a 'simple picture of a single perpetrator and a single victim, since both sides had their victims and their perpetrators'. The trials before the Tribunal in The Hague have proven this, Varady noted, adding that Croatian generals, charged with crimes against Serbs in the Medak pocket, are currently on trial in Zagreb. At the same time, Serbs charged with crimes against Croats in Vukovar and Lovas are on trial in Belgrade.

Days of war and intense hatred are past, as Varady sees it, while the relations between Serbia and Croatia are ‘normal, perhaps still delicate and fragile but nevertheless normal’. In this respect, Varady emphasized the gesture of Serbian president Tadic who made an unambiguous apology to the Croatian citizens for suffering his fellow Serbs had caused them.

Varady and two other legal counsel, Vladimir Djeric and Andreas Zimmermann, representing Belgrade, focused on presenting legal arguments challenging the jurisdiction of the world’s highest court to adjudicate in the proceedings instituted by Croatia in 1999. Belgrade’s representatives allege that when Croatia filed the application, the FRY was not a member of the UN and of the International Court and was not a signatory of the Genocide Convention. It could therefore not be a party in a case before the world’s highest court. Belgrade’s representatives furthermore contend that when this application was filed, the FRY was not ‘bound’ by the Genocide Convention, having acceded to it in 2001. In addition to this, when the FRY did accede the Genocide Convention, it placed a reservation on Article 9, not accepting the automatic jurisdiction of the International Court in the cases relating to the application of the Genocide Convention.

In 2006, Belgrade’s legal counsel used the same argument to contest the jurisdiction of the International Court of Justice in the Bosna Herzegovina vs. Serbia and Montenegro case. The judges rejected it then, confirming that the court had jurisdiction. However, in 2004 the International Court of Justice ruled that it lacked jurisdiction in the case about ‘the legality of the use of force’ filed by Serbia against ten NATO members for the air strike campaign against Serbia. The judges concluded that in April 1999, when the case was filed, the FRY ‘did not have access to the court’ since it was not a member of the UN and was not a signatory of its Statute and the Genocide Convention.

Croatia’s legal counsel will reply to the arguments presented by Serbia’s representatives tomorrow.