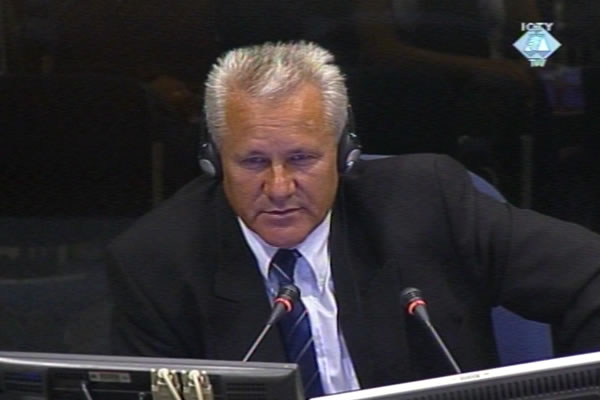 Asim Alic, witness at the Vojislav Seselj trial
In the night of 7 April 1992, four paramilitaries from Serbia crossed the Drina river at a wrong spot and ran into a check point manned by ‘armed Muslim citizens’ at the entrance to Zvornik. They were beaten up and handed over to the police where they were questioned by Asim Alic, deputy police commander. Alic is testifying today as a prosecution witness at the trial of the Serbian Radical Party leader Vojislav Seselj.

Two of the four captives were members of Arkan’s ‘Tigers’ - Milorad Ulemek Legija and a man by the name of Stojanovic, who was a dentist from Belgrade. The other two belonged to the Chetniks and were brothers: Dusan Vuckovic a/k/a Repic and Vojin Vuckovic a/k/a Zuca. Alic claims that Legija had three ID cards with him, of the JNA, the Arkan’s Tigers and the French Foreign Legion. The witness went on to say that the two Vuckovic brothers had ‘two ID cards’, those of the Serbian Chetnik Movement and of the Serbian Radical Party. After a telephone call from Belgrade, all four of them were released in the afternoon of 8 April, while the Serbian forces’ attack against Zvornik was in full swing.

In his cross-examination, the accused Seselj noted that in the statement Alic gave to the OTP in 1997 he had said the Vuckovic brothers had carried only the Serbian Chetnik Movement ID. According to Seselj, the witness added the Serbian Radical Party ID for the first time last week during his proofing session. The witness disagreed, saying he did mention the SRS ID card in his statement to the investigators but it was not recorded because of an ‘interpretation error’. When he testified at the Zvornik Group trial in Belgrade in 2006 Alic also spoke of ‘double’ ID cards, both ‘that of the Radical Party and the Serbian Chetnik Movement’ that the Vuckovic brothers had in their possession.

Today, Seselj referred to the Belgrade indictment against the Zvornik group, where the Yellow Wasps unit was described as part of the Zvornik Territorial Defense. Zuca was its commander, and Repic its most bloodthirsty member. Seselj showed a report by the Republika Srpska state security service from July 1992, where it is said that the ‘Yellow Wasps comprised about eighty Serbs from the Zvornik area and about twenty volunteers from Serbia ‘prone to criminal activities’. The report goes on to say that ‘Zuca and his Wasps harass the Serbian authorities in Zvornik trying to force them to make personnel changes in the municipal administration. The state security service people from Bijeljina proposed a special police intervention to neutralize them; this was done in the summer of 1992.

Dragan Spasojevic, former commander of the Zvornik police station (Asim Alic was his deputy just before the war) came to Seselj’s aid. In a statement he sent to the accused, Spasojevic describes Alic as a ‘Muslim nationalist’ who, in his words, armed and organized the Patriotic League and the Green Berets. Alic also led the action to take over the police station and the attack on the weapons depot, Spasojevic said, going on to accuse him of taking the lead role in the looting of abandoned Serbian houses in Zvornik. He also blamed him for the crimes against Serbs in the Sapna area where Alic was the police chief after the fall of Zvornik. Alic rejected all these accusations levied by his former chief as ‘heinous lies’.

Alic’s cross-examination continues tomorrow. Seselj will show him the statement sent by Vojin Vukovic Zuca, who was prompted to do so because he was ‘disgusted by the lies’ Alic said last week.