In the words of Andras Riedlmayer, prosecution expert for cultural heritage in the Balkans, about ninety percent of Muslim and Catholic religious buildings were ‘almost completely or completely’ destroyed in the eleven BH municipalities listed in the indictment against Vojislav Seselj 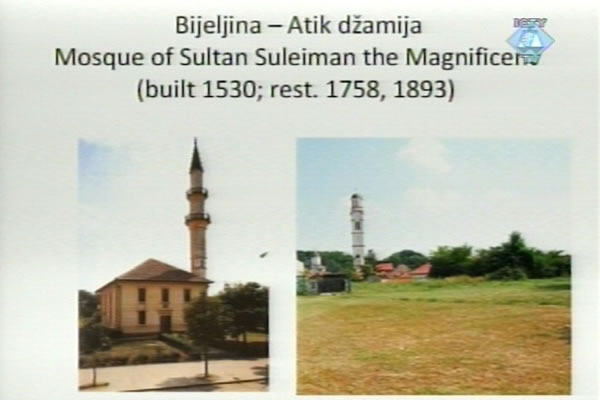 Atik mosque in Bijeljina
‘Religious buildings in the Balkans suffered destruction throughout history, but never had there been destruction at this scale with so many places of worship razed to the ground as was seen during this last war in the BH’, Andras Riedlmayer concluded today in his evidence on the destruction of religious buildings in BH from 1991 to 1995. Riedlmayer is a US expert for cultural heritage in the Balkans and is testifying as a prosecution expert witness. In the summer of 2002, he visited 158 Muslim and Catholic buildings in eleven BH municipalities listed in the indictment against the Serbian Radical Party leader Vojislav Seselj. Among the charges Seselj faces is the charge of ‘wanton destruction of public and private property’; mosques and Catholic churches belong to that category.

[IMAGE]3433[/IMAGE]According to Riedlmayer, the level of destruction was directly correlated to the age and historic importance of mosques and Catholic churches. The most important Muslim and Catholic religious buildings dating back to the Ottoman Empire and the days of Austria-Hungary were all completely destroyed. The few ‘lightly damaged’ buildings were mostly new mosques or churches not yet in use as they were still under construction. One of the oldest cultural monuments in BH, the Emperor’s Mosque in Nevesinje built in 1485, was razed to the ground; the rubble was taken to a dump outside of the town. Also, the mosque on the Mount Kuslat near Zvornik dating from 15th century and the 16th century Atik mosque in Bijeljina, were fully destroyed. On the other side, just three mosques, all under the construction, suffered light damage. One of them was the mosque in the village of Donji Krizevici near Zvornik. It was painted with graffiti glorifying the Serbian Radical Party of the accused Vojislav Seselj.

The largest number of religious buildings in BH was destroyed from September 1992 to September 1993, Riedlmayer stated. Most buildings were destroyed by explosives placed inside them and by fire. Despite the fact that some of the mosques and Catholic churches had sustained visible damage by shells and bullets, most of them were destroyed when there was no combat in the area. Although the witness included information on the perpetrators he received from his conversations with the local population, the Trial Chamber prohibited the prosecutor from questioning the witness about this, because it was hearsay and the witness was not tasked with gathering this sort of information.

Riedlmayer could not complete his evidence today because of frequent objections of the accused; both the prosecutor and the judges thought he should deal with those issues in the cross-examination. Riedlmayer will continue with his evidence next Tuesday.