After he examined Goran Hadzic, Belgian oncologist Pol Specenier concluded that the results were more or less 'normal'. Hadzic can look after himself and can move, but is not able to perform any tasks. The doctor expects Hadzic's 'condition to worsen' 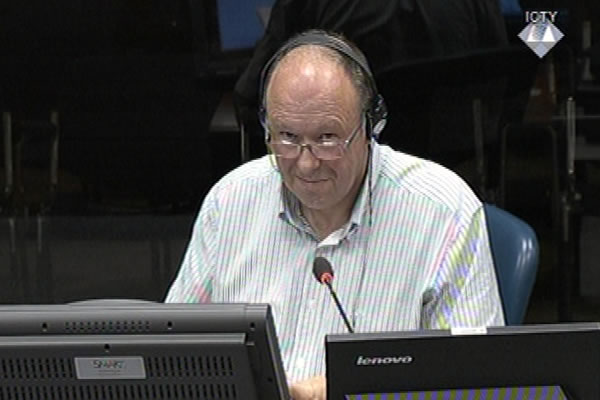 Apart from 'wobbling and slight shaking' Goran Hadzic's condition is 'normal', Dr. Pol Specenier, a neuro-oncologist from Belgium, concluded after examining the accused at the request of the Trial Chamber. Dr. Specenier examined Hadzic on 27 June 2015 in Novi Sad to establish if the accused was able to follow the trial and attend the proceedings. The medical expert presented his conclusions in an expert report and in the courtroom where he was questioned by the prosecution and the defense.

Although the results of the neurological examination were 'normal', Dr. Specenier noted that the 'patient's autonomy in dealing with everyday activities' was at a very low level. According to him, Hadzic can look after himself and is able to move around, but cannot perform 'any tasks' such as working on computer or reading longer than an hour.

As he was questioned by prosecutor Olmsted, Dr. Specenier said that during the 80-minute examination Hadzic was able to communicate. The situation would be different, the medical doctor noted, if several persons were to take part in a conversation or if Hadzic were in a stressful situation. According to the Belgian neuro-oncologist, reducing the duration of the trial, making it possible for Hadzic to follow the proceedings via video link and allowing him frequent breaks during the trial are 'relevant' for the assessment of Hadzic's ability to participate in the trial. At the same time Dr. Specenier stressed that Hadzic's 'condition is changing and is expected to worsen'. 'An hour or a day are not relevant', the medical doctor said. The tumor has not been removed, and it hasn’t responded well to the chemotherapy so the prognosis is not good, Dr. Specenier concluded.

As he was questioned by defense counsel Gosnell, Dr. Specenier confirmed that the tumor didn't respond well to the treatment. The illness has progressed and the condition has 'worsened dramatically' as the tumor has doubled in size. The medical specialist added that he didn't expect a 'sudden death'. One can expect the patient's 'neurological functions' to deteriorate precipitously and new symptoms will develop 'from week to week'.

At the end of the report Dr. Specenier commented on Hadzic's decision to discontinue chemotherapy. 'In his place I too would refuse therapy', the Belgian doctor said, in light of the fact that the chances of improvement are slight and benefits are minimal. According to Dr. Specenier, if Hadzic were to be questioned daily on his health, it would be 'difficult' for the patient and 'medically useless'. In fact, that would only make his condition worse.

By way of conclusion, the judges reminded both parties to submit their briefs by Tuesday, 25 August 2015. After that the Trial Chamber is expected to render its decision on the prosecution's motion to continue the trial and the defense's request to suspend the trial or to stay the proceedings.