ARMY, NOT GOVERNMENT, HAD JURISDICTION OVER CRIMES AND CRIMINALS

Goran Hadzic’s defense witness Vojin Susa claims in his evidence that at a meeting in Velepromet in Vukovar on 20 November 1991 the government was 'told the war crimes are under the sole jurisdiction of the army’. The prosecution alleges that the decision to hand the prisoners to the local Serb units was made at the meeting 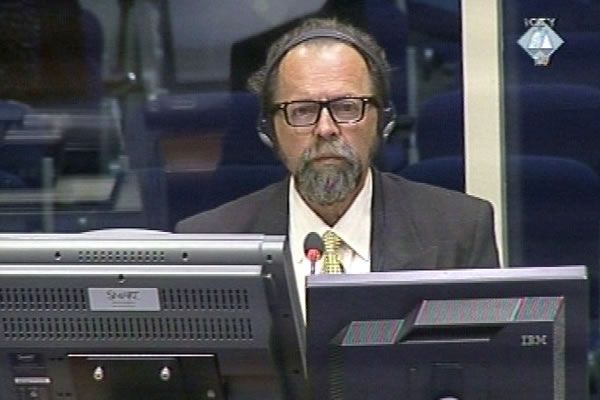 Vojin Susa, former justice minister in Hadzic’s government, continued his testimony at the trial of the former prime minister of the SAO Eastern Slavonia. Susa described the meeting held on 20 November 1991 in the Velepromet warehouse in Vukovar.

The prosecutor alleges that the meeting was actually a government session where the fate of about 200 wounded and sick people who had been moved that morning from the Vukovar Hospital to the JNA military barracks was decided. According to the prosecution, after the meeting the prisoners were taken to a hangar at the Ovcara farm where they were executed by the Serb forces later that night.

Describing the circumstances in which the meeting was convened, Susa said that at a regular government session in Erdut on 19 November 1991Hadzic urged the ministers to come to Velepromet to ‘score some political points’. He wanted to see as many of them there as possible. When Susa arrived in Vukovar he saw ‘all the horrors that had happened’ in the town. ‘I'm not sure there was a single house that was still whole there. There were just the chimneys left standing, it was surreal’, Susa recounted.

The witness said that JNA lieutenant colonel Milorad Vojinovic chaired the meeting in Velepromet. The people at the meeting allegedly rounded on Vojinovic, criticizing him for the troops' behavior during the battle to liberate Vukovar: the town was 'razed to the ground'. Vojinovic raised the issue of the prisoners. The army, according to Susa, planned to transfer the prisoners to three locations:Sremska Mitrovica, Begejci and Stajicevo, and to exchange them for Serbian prisoners, all for all.When Susa asked what about the crimes, Vojinovic allegedly told him that the ‘war crimes are under the sole jurisdiction of the army’, and that prisoners were mostly innocent men. In his intervention, Goran Hadzic said that until the crimes were investigated, ‘it is impossible to ascertain either the scale of the crimes, or the identity of the perpetrators’. The only known fact was the ‘enormous number of victims’, Hadzic said, adding that 'the government does not blame the entire Croatian people for the crimes’; they would have to 'live together". According to Susa, the meeting lasted about half an hour. Minutes were not taken and there was no agenda. Susa was adamant that the killing of the prisoners wasn’t discussed.

Susa also described Hadzic’s visit to Sremska Mitrovica in December 1991. Hadzic visited the prison there. As Susa recounted, Hadzic talked to the prisoners and promised them that they ‘will not stay in the prison too long’. He told them he was ‘sure the majority of them are innocent’. Hadzic asked the officers ‘whether they allowed the men to wash’, Susa added. As he answered the defense counsel's questions, Susa contested the prosecution case that the prisoners were interrogated and that force was used. Vojin Susa will continue his evidence tomorrow.