HADZIC FOUGHT FOR ‘LAW AND ORDER’

On the tenth day of his testimony, Goran Hadzic claimed that he advocated a ‘strong’ Republic of Serbian Krajina without ‘crime and anarchy’. Hadzic hoped that in the ‘new world order’ the RSK would be recognized as a state. At the beginning of the cross-examination, the prosecutor contested Hadzic’s claim that he did not have close ties with Arkan 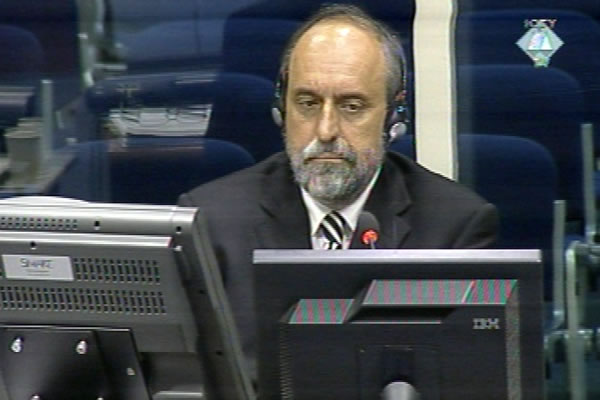 In the final part of his examination-in-chief, Goran Hadzic continued contesting the prosecution’s allegation that as the prime minister of Eastern Slavonia and as the RSK president he didn’t do anything to investigate crimes and punish perpetrators who were subordinated to him. Defense counsel Zivanovic presented dozens of documents showing, in his view, that perpetrators had been prosecuted.

According to Hadzic, the authorities in the Republic of Serbian Krajina were ‘strongly in favor’ of punishing those who were putting pressure on the non-Serbs to move out. Such behavior, in Hadzic’s view, was ‘a human and political failure’. ‘Today this view seems like a utopia’, Hadzic noted, explaining that the idea was for the ‘region to be strong, to respect law and order’ so that it could ‘vie as a republic’ for its place in the ‘new world order’. According to Hadzic, they did not want to be a region of ‘crime and anarchy’.

Hadzic concluded the examination-in-chief with another anecdote. In the prison in Beli Manastir he talked to a prisoner who denied that he had committed a murder and ‘robbed the dead victim’. Hadzic said that he remembered it because ‘every prisoner claims he is innocent’. Obviously, it didn’t occur to Hadzic that this goes for him, too.

Hadzic’s cross-examination will last more than 30 hours. At the beginning, prosecutor Douglas Stringer contested the claims made by the accused that he ‘had nothing to do with Arkan’ and that the leader of the Tigers unit didn’t provide security to him. According to the prosecution, Arkan did provide security to Hadzic during the period relevant for the indictment, from 1991 to the end of 1993. Hadzic had ‘close ties with Arkan’ because those ties ‘bolstered Hadzic’s authority’ and ‘allowed him to intimidate others’, the prosecutor noted. ‘That is not true’, Hadzic replied curtly.

The former prime minister of Eastern Slavonia argued that at the time relevant for the indictment he ‘had not even heard’ of Arkan’s crimes against the non-Serbs in Slavonia, Baranja and Western Srem. The claim prompted the prosecutor to show a photo taken in the training center in Erdut: Hadzic and Arkan, both dressed in military uniforms, are seen hugging. Hadzic said that he didn’t remember where the photo had been taken. It was not Arkan in the photo, but ‘someone else’, Hadzic argued. The training center was one of the facilities where the crimes listed in the indictment against Hadzic allegedly took place.

The prosecutor showed a series of videos of Hadzic and Arkan together, side by side: from the funeral of the Novi Sad Corps commander in October 1991, to a meeting with Biljana Plavsic in Bijeljina in 1993. Hadzic mostly claimed that it was just ‘coincidence’. As he said, ‘Arkan didn’t arrive with me’, and he ‘didn’t need Arkan’s security’. Those photos, the prosecutor argued, could well lead to a conclusion that Hadzic had ‘close ties with Arkan’.

‘This is a wrong conclusion’, Hadzic replied, stressing that Eastern Slavonia was a ‘small territory’. The prosecutor ‘took those few events out of the context’, Hadzic was adamant.

Goran Hadzic will continue his evidence on Monday.