On the seventh day of his testimony, Goran Hadzic denied his participation in the crimes he is charged with. He claims he knew nothing about them. He also denied the accuracy of an interview he gave after the fall of Vukovar on 20 November 1001, claiming he had adopted ‘a Machiavellian approach’: he lied because ‘the truth would have resulted in the collapse of the whole system’ 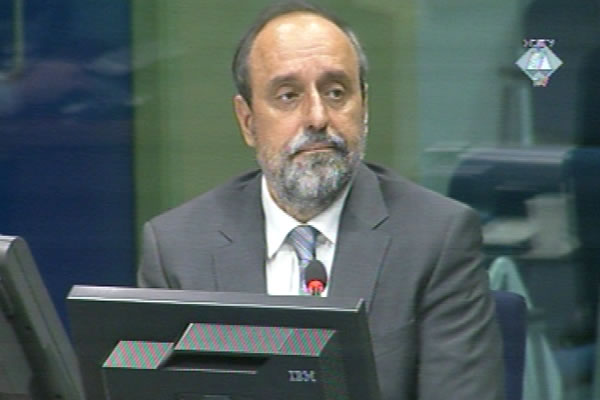 As the former prime minister of the Serbian Autonomous Region of Eastern Slavonia Goran Hadzic continued his evidence in his own defense, he denied he was responsible for the deportations from Ilok in October 1991. One of the charges against Hadzic is the forcible removal of thousands of Croats and other non-Serbs from large swathes of Croatian territory.

On the seventh day of his testimony, Hadzic claimed that the authorities in the Autonomous Region of Eastern Slavonia, Baranja and Western Srem did not organize any Territorial Defense (TO) staffs. According to him, it was a ‘fabrication’ because ‘no one could get there at all’. The JNA appointed the commander of the Ilok TO, and some people from the Serbian Ministry of the Interior were in charge of establishing a police station. The government was in the process of being established and it did not have a budget to pay anyone. Local civilian authorities, to the best of Hadzic’s knowledge, did not exist at all.

The prosecution charges Hadzic with the murder of 21 people in a mine field near the village of Lovas on 18 October 1991, the murder of several people in the TO training center in Erdut in November 1991, and the murders in Klisa. Hadzic claim he ‘was not in Lovas’ in 1991, and he only heard about the crimes ‘quite some time after it had happened’. According to him, the JNA was supposed to investigate those crimes.

Hadzic also denied that on 19 November 1991 he was either in Borovo Komerc or in the school in Borovo Selo. According to some allegations, he was there to question the prisoners. As he recounted, while the fighting was going on and after the fall of Vukovar on 18 November 1991, he ‘did not have any contacts’ with the JNA Operational Group South. He claims he did not enter the town until 20 November 1991. According to the testimony of the prosecution military expert Reynaud Theunens, from that day on the government ‘was running things, and the JNA played second fiddle’. Hadzic claims this ‘is not true’ because they ‘only embarked on the process of establishing authority’ on that day, while ‘martial law was in force in the region for at least another month; in some places for up to three months’.

Hadzic contested the allegations made by the prosecution, saying that on 20 November 1991 there was no ‘session’ of the Government of the SAO Eastern Slavonia; it was just ‘a meeting’. On that occasion, Hadzic gave a statement to the media, saying that ‘a decision has been made at the session of the Government… to the effect that all those with blood on their hands… if they can be called human beings at all’ would be brought back from the prisons in Serbia and would be detained ‘in our camps’. ‘Our people are the only ones who can try them’, he said.

Hadzic is adamant that the topic was not up for debate at all. As he explained, he referred to 15 to 20 people who had, according to his information, committed the gravest war crimes. The Government ‘was unaware of the existence of camps around Vukovar’, he added. He heard at a later date that those camps had been run by the JNA. One of them was the camp at Ovcara, where more than 190 people from the Vukovar Hospital were executed in the night from 20 to 21 November 1991.

Hadzic denied the accuracy of most of the statements he had made in the interview. He said he had adopted ‘a Machiavellian approach’. If he had told the truth, it would have caused ‘the collapse of the entire system’, he said. It is true that the military ‘refused to negotiate with us on any of the issues’, that ‘the people from the Territorial Defense made death threats to the members of the cabinet’, and that people were saying Vukovar municipality would secede and form a separate Serbian Autonomous Region. ‘If I had said that there were no civilian authorities at all, then the civilian authorities would have been established bypassing the Government’, Hadzic explained. He mentioned war crimes trials in the interview ‘merely to pour oil on troubled waters, to prevent incidents’. The interview had nothing to do with the events on the ground and it was misused, Hadzic concluded.