In his testimony, Goran Hadzic spoke about a ‘latent conflict with Milosevic’, the JNA’s responsibility for the Territorial Defense, the paramilitary formations and the protection of the people. Hadzic also talked about his appointment as the president of the Republic of Serbian Krajina. According to Hadzic, the president was just ‘the first among equals’. Does accepting a peace plan imply an obligation to implement it? 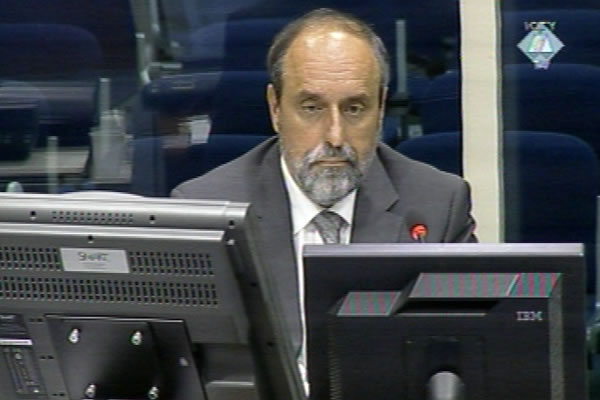 Goran Hadzic, former prime minister of the Serb Autonomous Region of Eastern Slavonia, described at the beginning of his evidence the ‘first signs ofa low-level conflict’ with Slobodan Milosevic in December 1991 before the Vance peace plan was signed. At that time, Hadzic claimed, he endorsed Milan Babic’s ‘reasonable views’. At the time Babic was president of the Serb Autonomous Region of Krajina. Both Hadzic and Babic thought Milosevic wanted the Vance plan to be signed ‘at any cost, without taking their opinion into account’.

When the peace agreement was signed in January 1992, Hadzic gave an ‘angry’ interview to the Belgrade daily Politika. In the interview Hadzic said that the Serb Autonomous Region of Eastern Slavonia had been ‘cheated’. The peace plan, Hadzic explained, ‘was not in line with the agreement reached with Vance’ or with the guarantees of the federal state and Serbia, involved in the negotiations. In Hadzic’s opinion, the interview was the ‘harshest criticism of Milosevic possible at the time’.

Speaking about the events in the field, Hadzic noted that the military authorities were in place after the fall of Vukovar. The Territorial Defense Staff was given the task of organizing the ‘authorities and the police and regulating the movement of the people’. They were to work with the command of the JNA 80th Motorized Brigade. According to a document the defense counsel showed today, the Territorial Defense Staff was responsible for the ‘safety of the population and property’. The JNA brigade was in command of the town and its task was to disarm the paramilitary formations.

Hadzic contends that the government of the SAO Eastern Slavonia ‘didn’t have any power’, and it did not have ‘jurisdiction’ over the Territorial Defense Staff in Vukovar. It was not in charge of providing protection for the local people or dealing with the paramilitary formations. According to Hadzic, the JNA ‘had absolute jurisdiction’ and supported the ‘side that had signed the Vance Plan’. The Serbs and the Serb leadership from Slavonia accepted the plan but the ‘federal state was a signatory and it undertook to implement it’.

Once the three Serb Autonomous Regions: Krajina, Western Slavonia and Eastern Slavonia, could be merged into a single entity, Hadzic was appointed the president of this new entity, the Republic of Serbian Krajina. Hadzic argued that it was just a ‘temporary solution’: he had accepted at the insistence of his colleagues who ‘persuaded’ him, in order to placate the conflicting factions. The ‘Knin Krajina’ didn’t accept him, Hadzic noted. Furthermore, the divergent interests of the three regions were not coordinated and it was impossible to pursue a common policy. According to Hadzic, the RSK constitution was ‘Babic’s constitution, the only thing missing was his picture on it’.

The RSK Constitution stipulated that the president exercised command over the armed forces, ordered mobilization and organized preparations for defense, but Hadzic was, as he explained today, ‘quite realistic’ as to what his function really entailed. He was aware of his ‘lack of knowledge’ and saw his role as a political posting. He was quite happy to let the ‘professionals run’ the army. As time went by, he cut down on his duties. Unlike Babic, Hadzic did not favor greater powers for the president. Hadzic saw his role as the president of the Supreme Defense Council for ‘what it was’: he was just the ‘first among equals’.

The defense has about three more hours for Hadzic’s examination-in-chief, which means that the cross-examination could begin by the end of the hearing tomorrow. Hadzic is on trial for crimes against humanity and war crimes in Eastern Slavonia and the Republic of Serbian Krajina from June 1991 to the end of 1993.