Prosecutor Douglas Stringer today referred to an interview conducted by the OTP investigators with Goran Hadzic in 2002, when Hadzic was treated as a suspect, to highlight the ‘close ties’ between the accused and his friend, military advisor and private bodyguard Zeljko Raznatovic Arkan 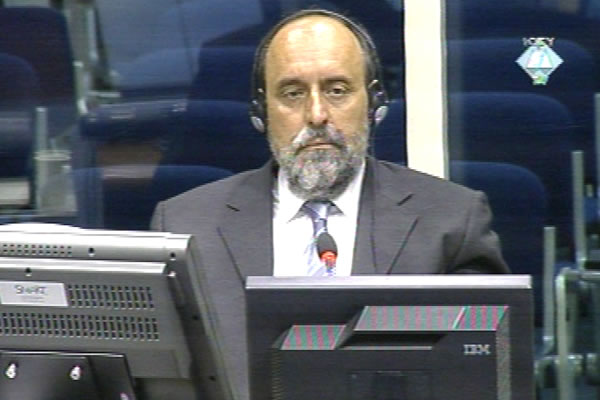 On the second day of Goran Hadzic’s cross-examination, the prosecution continued calling evidence on the ‘close ties’ between Zeljko Raznatovic Arkan and Goran Hadzic, the former prime minister of the Serb Autonomous Region of Eastern Slavonia and the former president of the Republic of Serbian Krajina.

Prosecutor Stringer referred to an interview conducted with Hadzic by the OTP investigators in 2002, in which Hadzic was treated as a suspect, to highlight the fact that Arkan was the commander of the Training Center in Erdut. Although Hadzic confirmed it in the interview with the OTP investigators, today he claimed he was ‘unaware of Arkan’s position’. He didn’t ‘put Arkan there’, Hadzic explained. The reply prompted the prosecutor to ask Hadzic to ‘stop playing with words’. Hadzic then said that Arkan was ‘what he was’.

The prosecutor went on to note that Arkan provided personal security to Hadzic and escorted him on the way from Erdut to the Velepromet building in Vukovar, where the cabinet of the Serb Autonomous Region of Eastern Slavonia met on 20 September 2014. The prosecution alleges that the fate of more than 200 wounded and ill persons from the Vukovar Hospital was decided during that session. That night the prisoners were executed on the Ovcara Farm.

In the examination-in-chief Hadzic claimed that he went to Velepromet with his personal security detail, which had nothing to do with Arkan, and yet, in his interview with the OTP investigators Hadzic stated that the ‘didn’t get special protection from Arkan, only the level of security determined according to the general assessment of the situation in the field’. In the interview, Hadzic said that he went to the Velepromet meeting with Arkan as his personal bodyguard. Arkan was supposed to ‘protect’ him from the Vukovar Serbs who ‘threatened to kill him’, Hadzic explained in the interview. Today Hadzic explained that he was ‘unprepared’ when he answered the questions put to him by the OTP investigators.

Hadzic denied that Arkan was ‘ever’ his political ally. According to Hadzic, Arkan would come to Easter Slavonia rarely, mostly as a civilian, not as a soldier. Hadzic expressed his doubts that in 1993 Arkan was the commander of the Serbian Volunteer Guard, also known as the Tigers. The prosecutor was prompted to ask Hadzic if anyone had advised him to deny his ties with Arkan, despite the fact that Hadzic did have ‘close ties’ with him during his tenure as the RSK president. Hadzic responded that he ‘didn’t hear’ any such advice. The prosecutor then read out a statement Hadzic gave to the the press at that time. Hadzic said that ‘in politics and my choices I have remained true to my friends’, and ‘I have been advised to renounce my friends, but I have not done so’. He concluded by saying, ‘today I espouse the same political option and the same friends’. The prosecutor contends that Hadzic never renounced Arkan because they were ‘friends’.

Hadzic also said that during the conflict he had heard of only one incident in which Arkan was involved. He didn’t hear about other crimes that Arkan allegedly committed. Although Arkan threatened he would ‘kill Milan Babic’s children if he didn’t sign the Vance Peace plan’, Hadzic didn’t think Arkan was a ‘dangerous killer’ as the prosecution described him. According to Hadzic, Arkan was just a ‘dangerous man’.

The prosecution then played a series of video recordings showing Arkan’s calls to ‘clean the Serb army of non-Serbs’. At an SDS rally, Milan Paroski urged the crowd to kill Hungarians. While the prosecution interpreted it as ‘incitement to violence’, Hadzic noted that he ‘cannot evaluate the political views’ of politicians from Serbia.