DID PRIME MINISTER HADZIC HAVE ‘MINIMAL’ OR ‘SUBSTANTIAL’ POWERS?

The prosecution has noted Goran Hadzic’s efforts to ‘minimize’ his role as the prime minister of the Serb Autonomous Region Eastern Slavonia and his ability to influence the government decisions. Hadzic renounced ‘idle talk and private opinions’ of party colleagues. But in 1991, the prosecution argues, Hadzic shared their views about the coexistence of Serbs and Croats being ‘an impossibility' 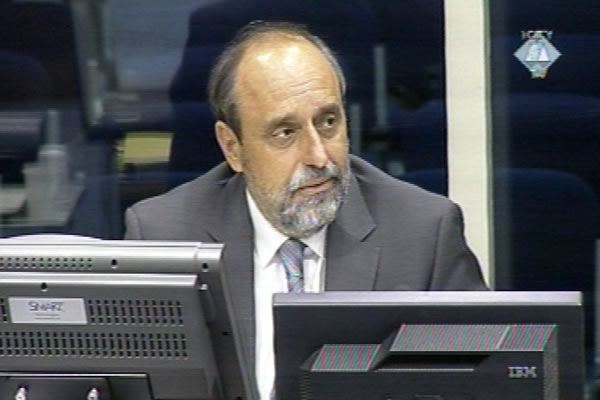 As the cross-examination of Goran Hadzic continued, prosecutor Douglas Stringer addressed the issue of the powers the accused had as the prime minister of the Serb Autonomous Region of Slavonia, Baranja and Western Srem. According to the prosecutor, Hadzic has been trying to ‘minimize’ his role and his ability to influence the appointment of ministers.

The prosecutor alleged that Hadzic ‘picked and chose’ all the ministers and the Assembly merely ‘rubber-stamped’ their appointment. Hadzic agreed that it was ‘technically’ true, but in the actual fact he couldn’t ‘minimize my role because it was as minimal as it could be already’.

Hadzic claimed that at its sessions the Serbian National Council didn’t discuss the ‘territorial aspirations’ of Serb in Eastern Slavonia. This prompted the prosecutor to play a video that contradicts his claim. As he was interviewed by a journalist, Hadzic said he ‘had initially thought peaceful co-existence was possible’. After he learned that Croats were arming themselves,Hadzic ‘realized there can be no co-existence’ and that a ‘peaceful separation should be considered’. The prosecutor alleged that in early 1991, Hadzic was already convinced there could be no co-existence. Hadzic argued that the prosecutor ‘didn’t listen carefully’ and failed to quote Hadzic in full: he had said that there could be no co-existence ‘under such conditions’.

The prosecutor went on to show the statements of the Serbian National Council spokesman Ilija Petrovic, who warned that Serbs would have to ‘stand firm’ and unite in ‘a single Serb country’. Ilija Koncarevic said that the Serbian National Council had decided the problem of the Serb-Croatian conflict should be resolved by ‘defining contentious and non-contentious’ territories and by suspending the powers of the Croatian Parliament. The same text was put into Ilija Petrovic’s appeal to the SRFY Presidency in February 1991.

Hadzic said that Koncarevic and Petrovic expressed ‘private opinions’, lived in Serbia and had no clue what problems he faced in Eastern Slavonia. In Hadzic’s opinion, Koncarevic wanted to ‘raise the profile of the Serbian National Council’ and ‘puff himself up’. ‘What could I do? Stand up, slap him and tell him that he is lying’, Hadzic concluded, adding that he was not [Koncarevic’s] ‘father or nanny’.

The prosecutor showed a series of legal acts passed in September and October 1991 which stipulate that the government ‘defines policies of the region’, ‘passes regulations’, appoints the Territorial Defense commander and the interior minister. Also, the laws stipulate that the government had the power to implement the decisions whereby the Territorial Defense was merged with the armed forces of the SFRY. The government met on the day after the fall of Vukovar, on 19 November 1991, to ‘formalize the demarcation of the SAO SBZS territory’, the prosecutor noted. In Hadzic’s words, they discussed the ‘temporary territorial organization’ and the ‘status of Ilok’. Hadzic assumed that the conclusions were adopted at the Assembly session on 22 November 1991.