In his evidence, Goran Hadzic spoke about the ‘conflict’, being ‘on bad terms’ and having a ‘political break-up’ with persons who allegedly participated in the same joint criminal enterprise. Hadzic claimed that he wasn’t able to exercise ‘either command or control’ over the Serb forces that actually perpetrated the crimes against humanity and war crimes he has been charged with 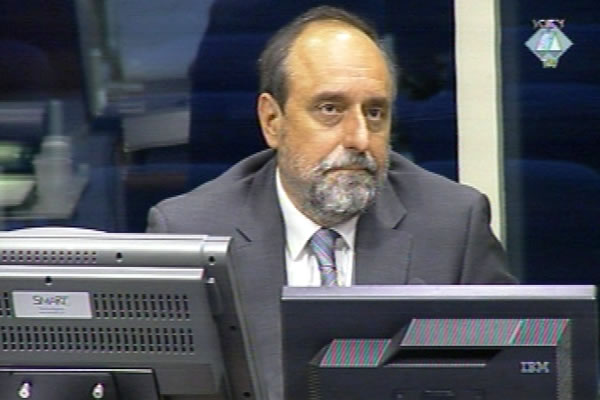 Goran Hadzic, former prime minister of the Serb Autonomous Region of Slavonia, Baranja and Western Srem and president of the so-called Republic of Serbian Krajina, is on trial for his involvement in a joint criminal enterprise aimed at a forcible and permanent elimination of non-Serbs from one third of the Croatian territory. In the evidence in his own defense Hadzic described his relations with other members of the joint criminal enterprise listed in the indictment.

As Hadzic recounted, he first met Slobodan Milosevic in February 1991. Hadzic was a member of the Serbian Democratic Party representing Serbs from Eastern Slavonia. As Hadzic explained, Serbs were panicking because Croats were arming up and Milosevic tried to pacify them, promising them the JNA would protect them. The next time, Milosevic called Hadzic on the phone to convince him to sign a ceasefire agreement. Hadzic went to Belgrade together with Milan Babic to attend talks about the special status of Serbs in Croatia. Milosevic told them that the ‘war should end’. Serbs would have their own legislature, executive and judiciary and their rights would be protected with international guarantees, Milosevic explained. Hadzic claimed that he was ready to accept such a plan but not at the cost of ‘betrayal’, which is why Babic was to accept the same deal. At a press conference, Babic had said that ‘Serb politicians are forcing us to remain in Croatia’. Hadzic stressed that he saw Milosevic a few more times, when they discussed the Vance plan.

Soon afterwards, Hadzic and Milan Babic ‘parted ways as politicians’ since Hadzic favored a ‘moderate’ option. Hadzic didn’t have ‘anything in common’ with Milan Martic, Krajina’s first interior minister. Hadzic and Martic met once ‘for five minutes’ in Borovo Selo. Their second meeting was in the SFRY Presidency when the Vance plan was discussed. They worked together at a later stage in the Supreme Defense Council. In February 1993, the Vecernje Novosti paper published Martic’s statement that Hadzic had been fighting for his own interests in the negotiations in New York. This caused a ‘conflict’ between the two men. The conflict escalated after the January 1994 elections when Martic, with Milosevic’s support, removed Hadzic from the post of the RSK president.

Jovica Stanisic, former chief of the Serbian State Security Service, is another member of the joint criminal enterprise whose name is mentioned side by side with Hadzic’s. The witness claimed that he ‘and Stanisic never worked together or indeed had any meetings’. Hadzic first met Vojislav Seselj, the Serbian Radical Party leader, when Seselj visited Pacetin. Seselj was initially quite ‘arrogant’. The relationship between Seselj and Hadzic ended in a row after Hadzic decided to support the Vance Owen plan for Bosnia. They did not talk to each other, as Hadzic said, until they met again in The Hague.

Hadzic described briefly his relationship with other members of the joint criminal enterprise. In Hadzic’s words, he ‘never met’ Radmilo Bogdanovic, the Serbian interior minister and the president of the Security Committee in the Assembly. Hadzic was on ‘bad terms’ with Mihalj Kertes, director of the federal customs administration. Hadzic met the two military generals, Veljko Kadijevic and Blagoje Adzic, only once and they ‘barely paid any attention’ to his requests.

At the end of his evidence today Hadzic denied that he was able to exercise ‘either command or control’ over the units listed in the indictment as direct perpetrators of crimes – the units of the JNA and the Territorial Defense of the SAO Krajina, SAO SBZS and Serbia, or the Serbian State Security Service and MUP special units, Martic’s police, and other paramilitary groups. Hadzic will continue his evidence on Monday.