MOTION FOR RECONSIDERATION OF DISQUALIFICATION OF JUDGE HARHOFF DENIED

In late August 2013, Judge Harhoff was disqualified by a chamber of judges, with a two-to-one split vote. Now a panel of judges has denied the prosecution’s motion for the reconsideration of that decision, again with the same result. A panel also denied requests for clarification as to why the opinions and statements of the judges with an interest in the matter were not taken into account. According to its decision, the Special Chamber found it was under no obligation to take into account the opinions of witnesses or indeed the statements made by the accused 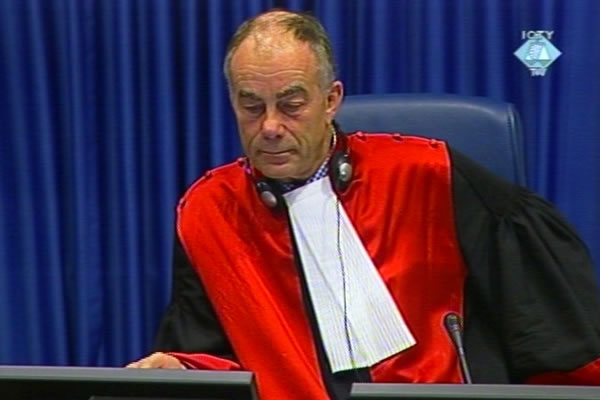 More than a month ago, the prosecution filed a motion asking the judges to reconsider the decision to disqualify Judge Frederik Harhoff, citing ‘fundamental errors of reasoning’. The panel of judges appointed by Vice-president Carmel Agius announced its decision today: there will not be any reconsideration. As everyone had labored under the impression that the decision was being reconsidered, it remains unclear why it took the judges so long to announce there would be no reconsideration. Perhaps it was because of the last week’s presidential elections at the Tribunal, won by the incumbent duo Meron-Agius.

The special chamber rejected the prosecution motion as ‘moot’ with a two-to-one vote. On 29 August 2013, Judge Harhoff was disqualified from the Trial Chamber in the case against the Serbian Radical Party leader Vojislav Seselj, again by a two-to-one majority. Judges Moloto and Hall voted against the reconsideration of their own decision, while Judge Liu again expressed his dissenting opinion. Judge Liu voted against the disqualification in the first instance. In Judge Liu’s view, the decision had to be reconsidered not only because the prosecution had brought up two clear errors in reasoning but also in order to ‘avoid injustice” being done.

The majority in the panel of judges concluded that the prosecution in its motion ‘failed to demonstrate a clear error of reasoning’ or any other circumstances which would call for the reconsideration of the decision to disqualify the Danish judge. Also, the requests for a ‘clarification’ filed by the judges of Seselj’s Chamber, Antonetti, Lattanzi and Harhoff, was denied. The three judges wanted to know why the special panel had failed to take into account the report submitted by the Trial Chamber’s presiding judge to President Meron and a written explanation sent by the Danish judge. According to their interpretation of the Tribunal’s rules and jurisprudence, the special chamber was not obliged at all to take into account their opinions and positions. It looks very much like Star Chamber proceedings, where the judges do not need to hear any witnesses (in this case, Harhoff’s colleagues, judges Antonetti and Lattanzi) or an explanation from the Danish judge Seselj had accused of ‘bias in favor of a conviction of the accused military commanders’.

This appears to have concluded the Harhoff case, as no appeal can be filed against a decision of the special panel, which is again reminiscent of other summary proceedings in history. It will be interesting to see how Seselj’s case will develop in the light of today’s decision. President Meron now has to appoint a new judge to replace the Danish judge in the Trial Chamber in the case of the Serbian Radical leader. Seselj is on trial for crimes against humanity in Vojvodina, Croatia and Bosnia and Herzegovina. The Trial Chamber must have a full complement of judges in order to be able to decide how to go on. The trial has ended but no judgment has been rendered yet. It remains to see when – or if at all – there will be a judgment.