In a memorandum addressed to Presiding Judge Antonetti, Judge Harhoff dismissed Seselj’s accusations of ‘bias’. Harhoff explained why and under what circumstances he expressed his concerns over the change in the Tribunal’s course in a letter to his Danish friends and colleagues. Judge Antonetti forwarded the memorandum to Vice-President Agius 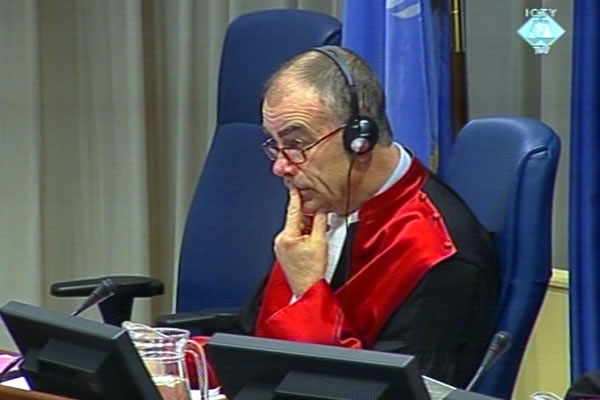 The avalanche of motions in the Harhoff case doesn’t show signs of stopping. In the interest of the transparency of the proceedings initiated against the Danish judge by Vojislav Seselj, who claimed Harhoff was biased and had an ‘inclination to convict the accused Serbs’, Judge Antonetti unsealed the internal memorandum in which Judge Harhoff responded to the Serbian Radical leader’s accusations. On Judge Antonetti’s orders, Harhoff’s memorandum was made public.

Last week, the majority in the panel of judges appointed by the Tribunal’s Vice-President Agius upheld Seselj’s motion for Harhoff’s disqualification. However, in their decision the judges didn’t mention if they had taken into account the report with Judge Antonetti’s dissenting opinion and the memorandum in which the Danish judge explained his views and rejected the allegation of bias. This prompted Antonetti and Harhoff to seek ‘clarification’ from Vice-president Agius and the panel he had appointed. Prosecutor Brammertz listed this omission as one the grounds in the motion for the reconsideration of the decision to disqualify the Danish judge. Judge Antonetti is the presiding judge in Seselj’s Trial Chamber.

In the internal memorandum to his presiding judge Antonetti – who forwarded it to Vice-President Agius – Harhoff explained why and under what circumstances he had expressed his concern over the change in the Tribunal’s course in a letter to his Danish friends and colleagues. The letter was published several days later without Harhoff’s knowledge and against his will first in the Danish media and then in the rest of the world.

Before he wrote the ‘incriminating letter’ Judge Harhoff sent to the same set of friends and colleagues a number of articles published recently in the New York Times and the Economist. The articles, What happened to The Hague Tribunal? and Two puzzling convictions in The Hague were later reprinted in the Tribunal’s media report prepared daily by the Tribunal’s press service. Reminding his friends of those articles, Harhoff wrote in a second e-mail that they ‘directly refer to the events that cause deep concern both for me and for my colleagues here in the corridors of the Tribunal'. The concern was that with the acquittals of generals Gotovina, Markac and Perisic, and the Serbian secret service chiefs Stanisic and Simatovic, the Tribunal had changed the ‘course’ in terms of its case law, raising the bar for the criminal prosecution and conviction of high-ranking commanders who knew about the crimes perpetrated by their subordinates.

In a bid to understand the rationale behind those judgments Harhoff tried to discern who may have had an interest in ‘adjusting’ the Tribunal’s jurisprudence vis-à-vis the responsibility of high-ranking military commanders. Harhoff assumed this was probably an external element, and that the military establishments in ‘dominating countries’ currently engaged in armed conflicts – such as the US and Israel – could be behind that. Harhoff went on to assume that those military establishments could have an interest in making sure that the international criminal law didn’t develop international criminal legal standards which could lead to the conviction of their generals as members of joint criminal enterprise or for aiding and abetting crimes unless they have actively participated in the commission of crimes or gave ‘specific directions’ as accomplices to the commission of crimes.

In that context, Harhoff clarified, he ‘allowed for the possibility’ that the Tribunal’s President had somehow fallen under this external influence and accepted the ‘tightening’ of the criteria for the criminal responsibility of the generals. Harhoff nevertheless added that it would never be known for certain if any such influence had ever been exerted.

Finally, Harhoff notes that the letter never mentioned Vojislav Seselj or his trial. Harhoff’s concern was primarily focused on the criminal responsibility of ‘senior military commanders’, and Seselj certainly wasn’t one. Also, Harhoff never expressed any prejudice towards Serbs, Muslims or Croats, or ‘even against generals as such’. Harhoff concluded that he simply didn’t hold any such prejudice. His letter, Harhoff noted, didn’t ‘contain any element that might cast doubts about my impartiality in this trial’.