Tolimir embraced the goals of the VRS and decided to pledge his alliance to Mladic instead of his God and the law, one of the prosecutors said in the closing argument at the trial of the former assistant commander for intelligence and security in the VRS Main Staff. Tolimir is on trial for genocide and other crimes in 1995 in Srebrenica and Zepa 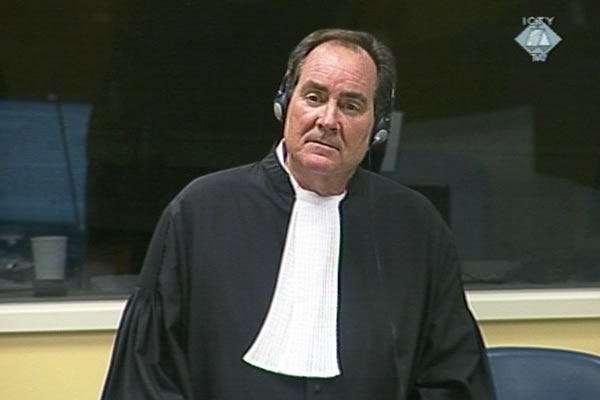 When he decided to side with Mladic, Tolimir lost his humanity and became the epitome of the expulsion of the people and the destruction in Srebrenica, prosecutor Peter McCloskey said at the end of the closing argument today. The prosecution sought life sentence for Mladic’s former close associate in the VRS Main Staff.

Tolimir’s responsibility for the murder of Muslim captives after the fall of Srebrenica in July 1995 is unquestionable and has been proven beyond reasonable doubt. In just four days, from 13 to 16 July 1995, the Bosnian Serb army and police executed over 7,000 men and youths captured after the fall of the enclave, the prosecution claimed. It is the prosecution case that the operation could not have been carried out without a military organization, discipline and chain of command. Ratko Mladic and Radovan Karadzic ordered the crime and the VRS Main Staff, the Drina Corps command and several of the Corps brigades implemented it, the prosecution contends.

As the prosecution claimed, the operation whose objective was to kill the captured Bosniaks was organized, implemented and overseen by the intelligence and security department of the VRS Main Staff, headed by Zdravko Tolimir. ‘Experience, effectiveness and ruthlessness’ of the security officers in the Main Staff, the Drina Corps and the Zvornik and Bratunac brigades were of key importance for the implementation of the execution. ‘Tolimir must be held responsible’ because he was headed that group, the prosecution argued.

By virtue of his post, Tolimir has a duty to find out about the crimes and prevent them, to report the perpetrators and to investigate the crimes, prosecutor Kweku Vanderpuye insisted.And yet the accused deliberately decided not to do anything because he personally was a member of the joint criminal enterprise aimed at the permanent elimination of Muslims from the Srebrenica and Zepa enclaves. According to the prosecution, Tolimir contributed significantly to the expulsion of tens of thousands of women and children; the goal was the same. The defense’s argument that the people left the enclaves voluntarily does not hold up, because there is ample evidence of a deliberate and planned campaign to create unbearable living conditions for the people in the enclaves that would force them to flee. Tolimir participated actively in that campaign.

Rupert Elderkin, one of the prosecutors in this case, talked about Tolimir’s responsibility for the opportunistic killings of small groups of Muslims captured in the Srebrenica and Zepa area. Prosecutor Abeer Hasan spoke about the permanent consequences of the execution of more than 7,000 men – fathers, husbands and sons – in the Muslim community in Eastern Bosnia.

The accused Zdravko Tolimir will present his closing argument tomorrow. The parties will then be given some time to present their arguments in rebuttal on Thursday.