TOLIMIR DENIES RESPONSIBILITY FOR CRIMES IN SREBRENICA AND ZEPA

Mladic’s former assistant for intelligence and security in the VRS Main Staff denies in his closing argument any responsibility for crimes that were committed, as alleged in the indictment, in the two enclaves in Eastern Bosnia in July 1995. The enclaves were under the nominal protection of the UN 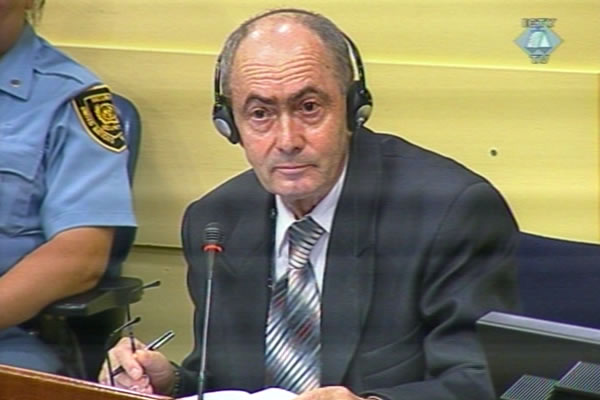 ‘The prosecution’s argument is pure speculation’ and the accusations are ‘baseless and have no foundation in law’, Zdravko Tolimir said today in his response to the prosecution’s closing argument. Yesterday, the prosecution urged the judges to find Mladic’s former assistant guilty of genocide in Srebrenica and crimes against humanity in Zepa. The prosecution asked the Trial Chamber to render ‘the only possible’ sentence – life imprisonment.

In his closing argument, Tolimir denied he was responsible for the crimes committed in Srebrenica and Zepa in July 1995, as alleged in the indictment. Tolimir denied he had anything to do with Karadzic’s Directive 7 issued in March 1995. The directive ordered the Drina Corps to ‘create an unbearable situation [for]further survival or life for the inhabitants of Srebrenica or Zepa’. As the accused insisted, Mladic’s Directive 7/1 that the VRS obeyed ‘makes no mention of this’. The VRS didn’t block convoys bringing in humanitarian aid and supplies for the UN troops in the eastern enclaves, the accused said. Tolimir claimed that the convoys were used to smuggle arms and that humanitarian aid was used as a cover for bringing in supplies for the BH Army.

The UN Dutch Battalion in Srebrenica didn’t perform its basic task, which was to demilitarize the enclave, Tolimir said. The Dutch Battalion refused to heed the constant warnings of the VRS and allowed the enclave to serve as the BH Army’s military stronghold.

As Tolimir argued, Operation Krivaja 95 as the VRS attack on the enclave was codenamed, wasn’t directed against the UN or civilians. The operation’s goal was to separate Srebrenica from Zepa in order to hinder the BH Army’s attacks from the protected zones. General Janvier’s decision to deny close air support to the Dutch forces in the enclave showed that neither the UN nor civilians were targeted by the VRS, Tolimir argued. After this decision, the Dutch Battalion soldiers issued the so-called ‘green order’ and established ‘blockade positions’ in order to ‘provoke’ the Bosnian Serb troops into firing on the UN which would trigger air strikes against the VRS positions.

The civilians from Srebrenica and Zepa weren’t deported or forcibly transferred from the protected zones. The decision to ‘evacuate’ them was made at the ‘UN level’ at the request of UNPROFOR and the civilian population in the enclave, with the consent of the leadership in Sarajevo. The Sarajevo leadership ‘kept it secret’ in order to blame it on the Bosnian Serbs.

As the hearing drew to a close, Tolimir addressed the issue of the ‘murder operation’ in which more than 7,000 men captured after the fall of Srebrenica were killed in just four days, as the prosecution alleges. During his defense case, Tolimir tried in vain to have Ratko Skrbic’s expert report admitted into evidence: Skrbic analyzed ‘the movements of the population’ and estimated that only 368 persons were ‘missing, killed or executed’ in Srebrenica. Yet today, Tolimir didn’t want to talk about figures. He explicitly denied he had anything to do with those murders, insisting that he hadn’t been at the execution sites. Tolimir also denied he knew anything about ‘any purported plan to kill prisoners of war’. According to Tolimir, he did not have the power to exercise command over the intelligence and security bodies and officers such as Ljubisa Beara, Vujadin Popovic, Drago Nikolic, Milorad Trbic or Momir Nikolic. All of them were tried and convicted for their part in the effort to organize the executions, either in The Hague or in Sarajevo. Nikolic pleaded guilty of the crimes before the Tribunal.

Tomorrow Tolimir will have about 15 minutes to complete his closing argument. After that the parties will be able to present their arguments in rebuttal.