In his evidence at the trial of Zdravko Tolimir, former British officer in UNPROFOR likened the scenes he saw in Zepa in July 1995 with the Holocaust 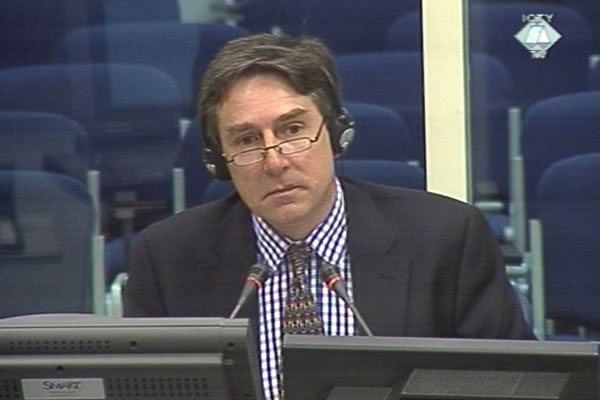 British officer David Wood, now retired, is testifying for the prosecution at the trial of Zdravko Tolimir. In July 1995, he was a close associate of General Rupert Smith, the commander of the UN troops in BH. Lieutenant colonel Wood, who was a major at the time, commanded a unit of the Joint Monitoring Commission in the UNPROFOR command in Sarajevo.

As a member of General Smith’s team, the witness accompanied the UN commander at almost all the meetings about the crisis in Zepa, the second UN-protected enclave taken by the VRS after Srebrenica. The witness met high-ranking Bosnian Serb officers on many occasions. Generals Mladic and Tolimir stood out in Wood’s memory because he saw them very frequently in the second half of July 1995.

The witness was introduced to Tolimir in 1995 in Pale at a lunch for the UN delegation after their meeting with Radovan Karadzic. Tolimir made it clear that he knew what Wood did, remarking that the two of them ‘are in the same job’. Tolimir also showed him a small bag attached to his belt. A hand grenade was inside, the witness recounted, and Tolimir explained to him that he ‘will never be caught’ because he would kill himself with the grenade.

The British officer also described his encounter with Tolimir in Zepa on 25 July 1995. There the witness who was ‘the sole UNPROFOR representative at the scene’, observed the women, children and elderly being put on buses and driven out of the enclave. According to the witness, Tolimir coordinated the operation and was assisted by several soldiers and police officers. In about 30 minutes the witness spent there, there was no overt violence. However, Wood claims he felt as if he witnessed a ‘scene from the Holocaust’. Tolimir held a pistol at shoulder height, contributing to the atmosphere of fear among ‘the people who were already scared’ and everything looked like ‘an instance of non-violent ethnic cleansing’, Wood said.

In the cross-examination, Tolimir used the testimony of the previous witness, UNPROFOR civil affairs officer Edward Joseph to contest the evidence of the British lieutenant colonel. Joseph recounted that he too observed the people board buses in the center of Zepa and assisted them. The accused asked the witness to look at a video recording showing the civilians and Mehmet Hajric, president of the Zepa War Presidency, and Avdo Palic, who commanded the BH Army unit in the enclave. Palic and Tolimir are seen shaking hands in the video. Lieutenant colonel Wood nevertheless remained adamant that in the half hour he spent in Zepa on the afternoon of 25 July 1995 he didn’t see those persons or anyone from UNPROFOR.

Judge Niamba asked the witness what he, as an UNPROFOR officer, could or should have done in the situation he described. The British officer replied that he didn’t respond because there was no direct violence. The witness thought that his presence at the time was enough to deter violence.

The trial of General Tolimir for genocide and other crimes in Srebrenica and Zepa continues on Monday.