GENERAL TALIC: A ZERO HERE, A ZERO THERE…

Retired JNA colonel contends that General Momir Talic proposed that the number of persons killed in the Serb attack on Kozarac be changed in the report: from 800 down to 80 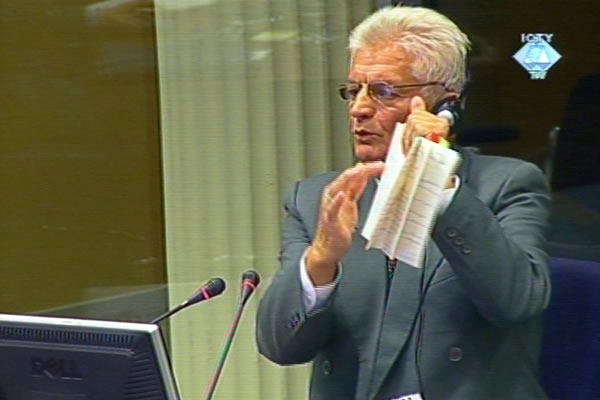 Retired JNA colonel Osman Selak was called to testify on the adjudicated facts about the attack of the Serb forces on the town of Kozarac. The defense teams of the two former Bosnian Serb police officials Mico Stanisic and Stojan Zupljanin contest the allegations in the indictment that 800 civilians were killed there in May 1992.

Colonel Selak served in the JNA for almost 40 years. In mid-May 1991, Selak put in a retirement request, one day after the JNA was ‘renamed’ VRS, as he put it. Selak remained at his post as the commander of the VRS logistic base in Banja Luka until the summer of 1992, when the administrative procedure for his retirement was completed.

In late May 1992, the witness attended a meeting where Colonel Dragan Marcetic informed General Momir Talic that about 800 persons were killed in the attack on Kozarac and 1,200 were arrested. The witness claims Talic told Marcetic: ‘You mean to say that about 80 persons were killed’, advising him to put this figure in his report to the Main Staff.

Later, when he talked to the survivors, the witness learned that a ‘mass physical elimination’ of Muslims from that territory began after attack. The Muslims were expelled, killed and their property was looted. People had to pay in order to be allowed to leave the territory and they had to sign statements renouncing their right to their property.

The prosecutor asked the witness to read to himself a document which he, Selak, saw for the first time in court today. Selak said that the figures for the victims in Kozarac were not accurate. The claims about 1,500 Green Berets stationed there were likewise not true. All routes that could be used to deliver arms to the Muslims were under the JNA control, and the only arms some Bosniaks were able to by on the black market came from the Serbs. The witness estimated that not more than 100 persons were able to procure weapons in this manner.

In the cross-examination, Mico Stanisic’s defense counsel put it to the witness that it was ‘highly probable’ that Marcetic stated that ’80 to 100 persons were killed in Kozarac’ and that in his notebook the witness ‘wrote down 800 by mistake, because it sounds similar’. ‘I wish to God you were right, but unfortunately many more people were killed’, the witness replied. The witness also said that he ‘will never be able to forget’ Talic’s suggestion that ‘makes my skin crawl even today’.

Stojan Zupljanin’s defense lawyer noted that in his first statement to the OTP from 1995, the witness stated that the army, the Territorial Defense and the paramilitaries participated in the attack on Kozarac and that the Prijedor police was not involved. At the time the police in Prijedor was under the jurisdiction of the Banja Luka Security Services Center headed by the accused.

As the hearing today drew to a close, Hujdur Kemala from the village of Hrenovica began his evidence at the trial for the crimes of Serb police against Bosnian Croats and Muslims.