Former president of the Serbian Democratic Party from Prijedor contends that ‘the rumors making rounds in the town blamed all illegal acts and lack of discipline by individuals and groups’ on the SDS. As the witness explained, all that SDS was actually trying to do was to ‘avoid the conflict’ and prevent ‘the replay of the tragedy’ that hit the Serbs in World War II 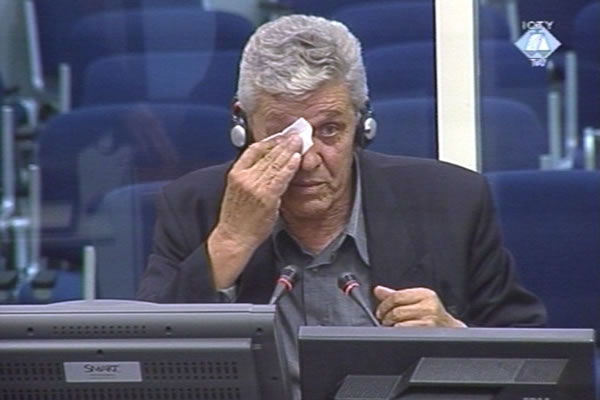 Simo Miskovic, witness at the Mico Stanisic and Stojan Zupljanin trial
The Serbs took over power in Prijedor only when there was a threat that a conflict would break out, contends former president of the Serbian Democratic Party in Prijedor Simo Miskovic. He testified at the trial of Mico Stanisic and Stojan Zupljanic about the final preparations for the takeover of power in the town and spoke about the night of 29 April 1992 when it happened.

According to Miskovic, the final decision was made on 29 April 1992 at a meeting of the local Serb officials in the JNA barracks. The police and the Territorial Defense were to get ready and to launch the operation that night at 4am. By 6am the next morning, the Assembly, police, post office and other institutions were under Serb control. The witness repeatedly stated that the takeover proceeded ‘without a single scratch’.

The former president of the Prijedor SDS maintained that the decision to seize power was a response to ‘the danger of a conflict breaking out’ after the BH interior minister Alija Delimustafic sent a memo demanding that roads be blocked to prevent any attempts to remove the JNA equipment and weapons.

In July 1992, Miskovic visited the Omarska camp in a delegation with the accused Zupljanin and other local officials. He entered the camp with his head down because he was embarrassed and he spent all the time there in the conference room. As Miskovic said, he saw the prisoners only when he climbed up the stairs. The witness didn’t recognize any of them because they were unshaven, wearing rumpled clothes: they obviously slept in them and ‘didn’t have a chance to put them away on clothes hangers’, Miskovic said. Miskovic didn’t want to comment on the health of the detainees.

After the takeover of power, ‘I tried to protect my own dignity and the dignity of the party’, Miskovic explained, since ‘the rumors making rounds in the town blamed all lack of discipline and illegal acts by individuals and groups and all negative events’ on the SDS. In an open letter published in a local newspaper, Miskovic urged the authorities to do something about it. Today, Miskovic evaded answering the question what those ‘illegal acts and lack of discipline’ actually entailed. Finally, when he was asked for the third time, Miskovic said, ‘there were rumors about looting, murder, removing stuff from other peoples’ houses...’. In almost all of his replies, Miskovic noted that the only goal of the SDS was to ‘avoid the conflict’ and prevent ‘the replay of the tragedy’ that hit the Serbs in World War II.

Stojan Zupljanin’s defense insisted that the SDS activities were nothing but a ‘defensive response’ to the decision to declare BH independence, adopted by the Croat and Bosniak representatives in the national assembly. The witness agreed that the SDS never had any plans to implement the ideas about the takeover until ‘there was a danger for BH to secede from Yugoslavia, and the Serb people was opposed to that’.

The witness’s evidence was interrupted after he broke into tears as he talked about the breakdown of the co-existence of Serbs, Muslims and Croats, describing his efforts to find a negotiated solution for all disagreements to ‘prevent the Serbs from ending up in World War II situation’.