Completing the cross-examination of General Sinisa Borovic, the prosecutor was striving to prove that General Momcilo Perisic had to have known about the crimes in Srebrenica but did nothing to prevent or punish them. The prosecutor contends that the information could have come from the VJ intelligence officers on temporary transfer in the VRS in the summer of 1995 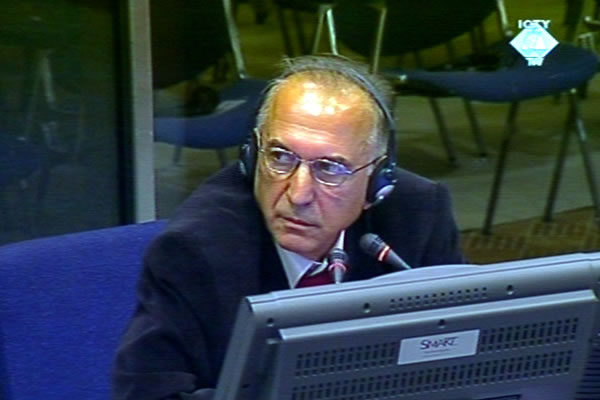 Sinisa Borovic, defence witness of Momcilo Perisic
In the cross-examination of Sinisa Borovic, former chef de cabinet of General Momcilo Perisic, the prosecutor suggested that the VJ personnel transferred to the VRS in summer 1995 were aware about the massacre in Srebrenica and were thus able to inform their superiors in the VJ.

General Perisic is charged with providing personnel and other support to the Bosnian Serb army. Perisic thus contributed to the crimes their troops committed in Sarajevo and Srebrenica, the prosecution alleges. According to the indictment, Perisic was in a position to know that his subordinates perpetrated crimes but did nothing to prevent crimes or punish perpetrators.

The prosecutor first showed Borovic a request General Ratko Mladic sent to General Perisic on 25 April 1995, asking him to send VJ intelligence officer Radoslav Jankovic to the Intelligence Administration of the VRS Main Staff. According to Jankovic’s personnel file, he was transferred to the 30th Personnel Center of the VJ General Staff on 2 June 1995 ‘at the request of General Perisic’.

A month later, on 12 July 1995 Jankovic was filmed in the Fontana Hotel in Bratunac together with General Mladic, who told the representatives of the Srebrenica refugees to choose whether they wanted ‘to survive or disappear’.

The prosecutor showed Borovic another request of the VRS Main Staff to transfer Lieutenant-Colonel Svetozar Kosoric to the post of the chief of the intelligence department in the Drina Corps. According to the video footage the prosecutor showed today, Kosoric attended Mladic’s second meeting with the refugee representatives on 13 July 1995. On that occasion, Mladic repeated that they had a choice: ‘to survive or disappear’.

In an effort to prove that Perisic had to know about the crimes in Srebrenica, the prosecutor put it to the witness that ‘the capture of a UN-protected enclave, forcible transfer of tens of thousands of inhabitants and murder of thousands of people’ should have been a security problem for the FRY. Jankovic, as an intelligence officer, had to inform his superiors in the VJ about that. Borovic replied that once Jankovic was transferred to the VRS, he ‘no longer had anything to do with the VJ 2nd Administration and was under no obligation to report to it’. Borovic added that if he had found himself in that same situation, he would not have participated in an operation that ran counter to his beliefs, such as the operation in Srebrenica.

General Perisic’s defense will not be calling any evidence next week. The trial will continue on Monday, 4 October 2010.