The defense teams of Jadranko Prlic, Milivoj Petkovic and Bruno Stojic have so far opposed the prosecution’s motion seeking leave to tender into evidence parts of Mladic’s ‘war diaries’. Prlic and Praljak argue that the prosecution has ‘engaged in a public relations campaign’. They request the Chamber to lift the confidentiality of the diaries and to grant permission to the parties to disclose and discuss with the press the content of Mladic's diaries 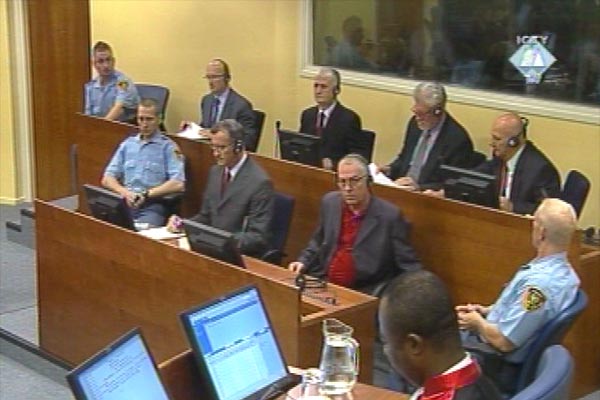 Jadranko Prlic, Milivoj Petkovic, Bruno Stojic, Slobodan Praljak, Valentin Coric and Berislav Pusic
The defense of Jadranko Prlic filed a motion asking the Trial Chamber to lift the confidentiality of Mladic's diaries and to grant permission to the parties to disclose and discuss with the press their contents. Prlic's defense argues that this request was necessitated because of recently published articles in the press, "wherein it would appear that the prosecution is engaged in a public relation campaign".

In the motion, Prlic's defense has quoted articles published in International Herald Tribune and New York Times "containing information" from Mladic's diaries. The information concern statements made by Jadranko Prlic and Slobodan Praljak on the meetings they both attended. The defense also quotes the statement made by the Chief Prosecutor Brammerz in which he announced his plans to grant the public access to the diaries in full.

The defense of the former prime minister of Herceg Bosna has recently announced that - if the prosecution's request is approved - it will file a motion to tender into evidence parts of Mladic's diaries that prosecution has not sought to tender. This evidence, according to the defense, is in favor of the accused.

According to Prlic’s defense, Mladic’s diaries show that former UN adviser for civil affairs Victor Andreev relayed confidential information to the Serbs during the war and thus ‘influenced the events on the ground as well as the negotiating table’. The defense maintains that this ‘brings into doubt the accuracy and reliability’ of the documents drafted by UNPROFOR, admitted into evidence as prosecution exhibits. This also raises doubts about the credibility of some international witnesses.

Prlic’s defense has also questioned the credibility of former chief of civil affairs Cedric Thornberry. In his evidence at the trial of the former Herceg Bosna officials, Thornberry said that Andreev ‘was one of the best and most experienced rapporteurs’ from the war-torn BH.

During the trial, Judge Arpad Prandler of Hungary mentioned in the course of the testimony of the accused Milivoj Petkovic that he knew Mr. Andreev from the UN and New York. Prlic’s defense asked the Trial Chamber to schedule a public hearing to clarify the nature of their acquaintance.

After Prlic, the defense of the former chief of the HVO Main Staff Milivoj Petkovic also opposed the prosecution’s motion, contending that 15 ‘relatively short’ excerpts from Mladic’s diaries that the prosecution wanted to tender into evidence, have been ‘taken out of context’ and ‘misinterpreted’ by the prosecution. The defense has also indicated that if the prosecution’s request is granted it will seek leave to reopen its case and to be given an opportunity to cross-examine General Manojlo Milovanovic and investigator Erin Gallagher, who have corroborated the authenticity of Mladic’s diaries.

A motion filed by the defense of the former Herceg Bosna defense minister Bruno Stojic notes that Mladic’s diaries do not represent ‘fresh evidence’. With the trial nearing its close, admitting the diaries into evidence would unnecessarily extend its duration, the defense argues. Finally, in the defense’s view, the ‘need to ensure a fair and expeditious trial outweighs any probative values’ of the material.