Miodrag Simic is the first witness of the defense of former chief of the VJ General Staff Momcilo Perisic. Simic contends that the VJ never ‘co-operated’ with the VRS and the SVK. The Drina plan that assumed deployment of the Yugoslav army outside of FRY was a ‘deception’, the witness maintains 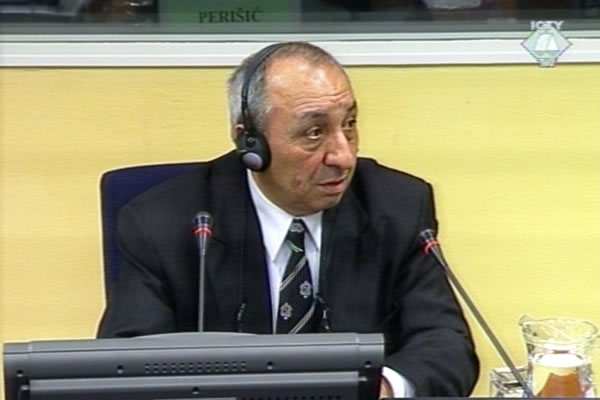 Miodrag Simic, defence witness of Momcilo Perisic
Former chief of the First Administration in the VJ General Staff Miodrag Simic continued his evidence at the trial of General Momcilo Perisic. Simic explained the term ‘operative-strategic deception’: it was used to ‘deceive the enemy and protect the commands of the VJ units’.

According to the witness, an example of the operative-strategic deception was the ‘Drina Plan’ logged on 24 November 1993 in the VJ General Staff’s First Division. In Simic’s words, the top people from the VJ General Staff, Manojlo Milovanovic from the VRS Main Staff and Mile Novakovic from the SVK Main Staff drafted the plan for the deployment of the armed forces. The document was signed by Zoran Lilic, president of FRY and of the Supreme Defense Council.

The plan speaks in detail about ‘the probable aggression” of the Croatian Army against the RSK; the attack was assumed to target the Serb territories in Western Slavonia and Baranja. Another goal was to “embroil Republika Srpska and the Federal Republic of Yugoslavia in the war’. According to the witness, some of the hypothetical elements the plan was based on came true with the Croatian Operation Flash launched on 1 May 1995.

The Directive on the Deployment of the Armed Forces, a part of that war plan, stated that ‘potential aggressors should be discouraged from threatening the territorial integrity by achieving full combat readiness of the VJ’. The witness clarified what it meant: the FRY should use its forces to ‘co-operate with the SVK in countering the attacks on Baranja and Western Slavonia, and with the VRS in the Drina River valley and eastern Herzegovina’.

The VJ ‘never co-operated according to the plan’, Simic said. In his reply to Judge Moloto, the witness explained that the VJ never did operate in line with that directive during Operation Flash because the document was not ‘a real plan’ for the deployment of the FRY armed forces. As the witness put it, the plan was ‘in the sphere of strategic deception’. As soon as he started working on the plan he ‘had some doubts’ about the sincerity of the document, because those who drafted it never signed any confidentiality agreements, the witness noted.

As the witness explained, the Drina Plan was never further elaborated or implemented, in part because chief of the VJ General Staff Momcilo Perisic ‘never authorized it or signed it’. Perisic is charged with providing logistic, material, personnel and other support to the Serb armies in Bosnia and Croatia. The prosecution alleges that Perisic ‘significantly’ contributed to the artillery and sniper terror campaign in Sarajevo, the rocket attack on Zagreb and the crimes in Srebrenica.