Momcilo Perisic’s defense claims that the former chief of the VJ General Staff didn’t have effective control and didn’t provide significant support to the Serb armies in Bosnia and Croatia. The VRS and SVK commanders had effective control. The arms were provided through ‘defense industry’ with the approval of the FRY Defense Ministry 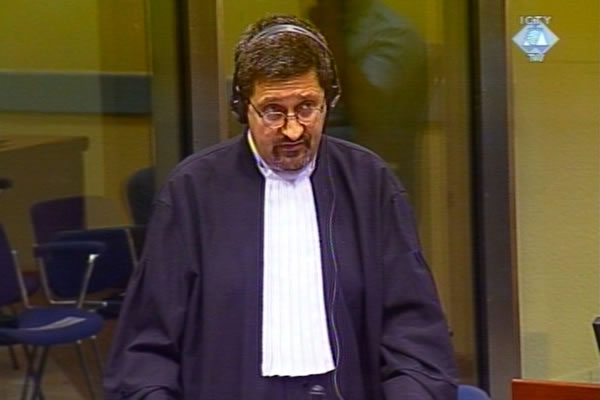 Novak Lukic, , defence counsel of Momcilo Perisic
In the opening statement, Momcilo Perisic’s defense argued that the former chief of the VJ General Staff didn’t provide any significant support to the Serb armies in Bosnia and Croatia. According to the defense, Perisic didn’t have effective control over those troops, which, as the indictment alleges, directly committed the crimes in Sarajevo, Zagreb and Srebrenica. The prosecution tried to prove that Perisic exercised effective control by providing financial, logistic, personnel and other support to the VRS and the SVK; he also had the right to decide on promotions and discharge of the personnel in the units sent there through the 30th and 40th VJ Personnel Centers.

The defense maintains that the personnel centers were only administrative bodies in the VJ General Staff Personnel Division. The personnel centers were used ‘only to regulate the status and entitlements’ of the VJ personnel sent to the VRS and the SVK. Perisic’s defense counsel noted that the VJ General Staff and General Perisic ‘were the last to be consulted about the salaries’ of the personnel; the government and the Defense Ministry decided that, based on the decisions of the Supreme Defense Council. Although officers received their salaries in the FRY, they, according to the defense, ‘felt they belonged to the original army’. Perisic was not responsible for their ‘promotion, discharge and other status issues in the service’ regulated by the VRS and the SVK rules and procedures.

[IMAGE]4587[/IMAGE]Defense counsel Novak Lukic noted that General Perisic didn’t have effective control over the VRS troops. To corroborate the claim, Lukic quoted the indictment against Ratko Mladic, arguing that ‘as the commander of the Main Staff General Mladic was the highest ranking officer in the VRS, subordinate only to the Presidency/President of Republika Srpska’. Mladic had ‘comprehensive authority and responsibility over the functioning of the VRS’, the defense noted. ‘Mladic exercised military command and control over the VRS regular troops throughout BH’, Lukic argued. According to the defense, an army operates along the principles of singleness of command and subordination where ‘it is known who is commander, who is subordinate, who issues orders and who exercises control’.

The prosecution alleges that Perisic ordered his subordinates to go to the VRS and the SVK. Once they were sent to those armies, operative leadership was conferred on the commanders of the two armies. The defense on the other hand claims that the terms ‘secondment and conferring operational command’ do not exist in the legislation covering the JNA, VRS and VJ. There cannot be more than one line of command in organized armies, noted the defense. The defense also pointed that the relationship between the VJ on the one and the VRS and SVK on the other hand wasn’t that of control and subordination. Instead, there was cooperation and coordination.

The defense indicated that the participants in the actual events will testify about the Supreme Defense Council documents. According to the defense, the Supreme Defense Council’s ‘mystery of secrecy was used to foment speculation and false claims in the public’. The documents, discussed today in closed session, will show that the FRY and General Perisic ‘considered a peaceful resolution of the conflict to be of primary importance’, defense counsel Guy Smith said.

Perisic didn’t provide logistic support in arms and military equipment to the VRS and the SVK, his lawyer said. Both armies received weapons through ‘defense industry with the approval of the Defense Ministry, not the VJ’; the two armies provided support to each other and received support from other countries such as Greece, Bulgaria, Romania and Russia.