Vojislav Seselj claims his demand to expel Croats from Serbia was in line with international law. Seselj contends that neither he nor his party had anything to do with the efforts to pressure Croats into leaving Hrtkovci 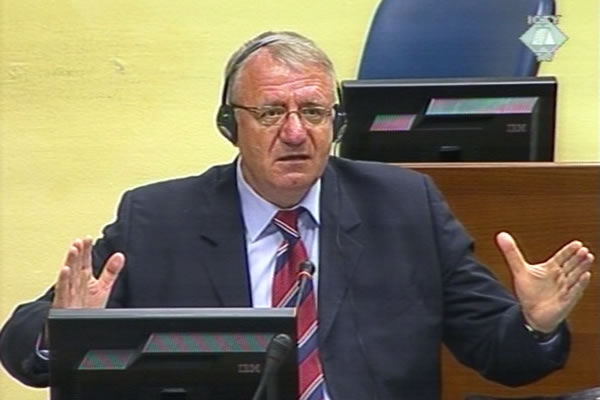 Vojislav Šešelj u sudnici Tribunala
In the cross-examination of protected witness VS-067 Serbian Radical Party leader Vojislav Seselj quoted from his speech at a Serbian Assembly session of 1 April 1992. In the speech Seselj urged that retortion, a form of retaliation, would be applied to Croats living in Serbia. ‘If we had reasons to expel Germans from Vojvodina after the World War II, now we have so many more reasons to expel Croats’, Seselj argued then.

In his evidence, the witness described how he and many other residents of Hrtkovci, a village with a Croat majority, started moving to Croatia after a speech Seselj made at a session of the Serbian National Assembly and after his rally in Hrtkovci on 6 May 1992. ‘I didn’t really want to leave my homeland, but we couldn’t remain there under the circumstances…We felt we were not safe and we should move to Croatia’, the witness explained.

The eviction of Croats from Hrtkovci is one of a series of war crimes the prosecution is attributing to Seselj, who is also charged with aiding and abetting his followers in the paramilitary units in the effort to ethnically cleanse parts of Croatia and Bosnia.
At the hearing today, Seselj contended that his demand to expel Croats from Serbia was in line with international law, using America as an example. In World War II, USA detained it citizens of Japanese ancestry ‘in concentration camps’. ‘International law is not humane’, said Seselj.

In the second part of his cross-examination, Seselj tried to prove that Ostoja Sibincic had joined the Serbian Radical Party only in 1995: until then he had been the president of the SPO chapter in Hrtkovci. The witness and the prosecution identified Sibincic as the person who coordinated the pressure on Croats in Hrtkovci. Seselj quoted Sibincic’s statement, certified in court, and several other statements Seselj had received in the meantime from his legal associates.

On the other hand, SPO activist Aleksa Ejic maintained that Sibincic had left the party by 1991 and joined the Radical Party. Ejic gave evidence in October 2008. Today, prosecutor Lisa Biersay quoted what Seselj had said at a press conference in 1993, when he demanded that the Serbian Radical Party activists – including Sibincic – be released from detention.

Seselj also noted that during the war the Croats in Serbia ‘were treated immeasurably better’ than Serbs in Croatia. The witness agreed with him.

The trial of the Serbian Radical leader continues in the first week of March 2010.