In a new indictment for contempt of court, Serbian Radical Party leader Vojislav Seselj is accused of disclosing information that may reveal the identity of 11 protected prosecution witnesses in a book he wrote 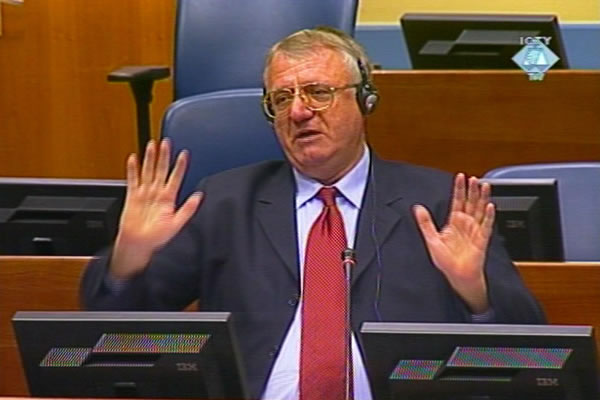 Vojislav Seselj in the courtroom
Serbian Radical Party leader Vojislav Seselj faces new contempt of court charges. In one of his books, Seselj disclosed the information that may lead to the disclosure of the identity of 11 protected prosecution witnesses. The title of the book was not disclosed. In July 2009, Seselj was found guilty of contempt of court for disclosing the identity and testimony of three protected witnesses. Seselj was sentenced to 15 months in prison.

Judge O Gon Kwon signed the order instead of the indictment. Judge Kwon is the presiding judge in a special Chamber which also includes judges Kevin Parker and Barton Hall.

The order made public today specifies that Seselj’s book contains ‘numerous references’ which enable the disclosure of the identity of no less than 11 protected prosecution witnesses, including their real names, occupations and places of residence. The Trial Chamber protected the identity of the witnesses in a number of orders it issued from June 2005 to October 2007.

The prosecution asked for the new contempt of court proceedings in a confidential motion filed in January 2009. The Trial Chamber rejected the motion, noting that ‘while it had sufficient grounds to believe that confidential information was disclosed’ in the book, the Chamber was ‘not persuaded that disclosure attained such a level of gravity’ to instigate proceedings against Seselj. The prosecution appealed against the decision. In December 2009, the Appeals Chamber granted the appeal, ordering the Special Chamber to file a new indictment against Seselj.

The Special Chamber has already issued an order to the Tribunal’s Registrar to appoint counsel amicus curiae to represent the prosecution. Seselj will enter his plea on the counts in the indictment at a later date.

At Vojislav Seselj’s ‘main trial’ on charges of crimes against humanity in BH, Croatia and Vojvodina, the Trial Chamber is now hearing witnesses it has called.