Former member of the Yugoslav rowing team Isak Gashi has described the suffering of Bosniak and Croat detainees in the Luka camp in Brcko. Gashi claims he saw five civilians being killed by police officers 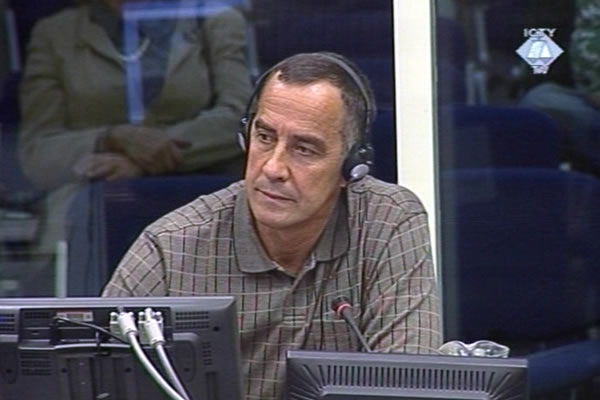 Isak Gaši, svjedok na suđenju Mići Stanišiću i Stojanu Župljaninu
Isak Gashi, former member of the Yugoslav rowing team, completed his evidence about the events in Brcko and the ordeal of the detainees in the Luka camp in 1992. According to the indictment against the top Bosnian Serb police officials Mico Stanisic and Stojan Zupljanin, prisoners in the Luka camp were killed and severely beaten, humiliated and forced to sexually abuse each other. Female detainees were raped.

Isak Gashi, who worked as technician in the Brcko power company, was arrested on 27 May 1992 by two uniformed police officers. They took Gashi to a local police station from where he was transferred to a hangar of the Luka camp. Gashi spent ten days there. Gashi was first beaten by a man called Ivan, a member of ‘Arkan’s men’. Ivan put a pistol into Gashi’s mouth and pulled the trigger. Luckily, the pistol was empty; Ivan ‘promised there would be a bullet’ for Gashi next time.

Some days later, a police officer by the name of Konstantin Simonovic, who claimed he was the deputy camp commander, took Gashi to the office of Goran Jelisic a/k/a Adolf. Gashi was tied to a chair and then, as he recounted, Jelisic first ‘poked him several times with the knife’. Jelisic promised Gashi that next time he would ‘cut his legs and arms off and then slit his throat’. Goran Jelisic pleaded guilty to numerous murders in the Luka camp and in Brcko in May 1992 before the Tribunal. He is currently serving his 40-year sentence in a prison in Italy.

Gashi said he was present when a police officer killed two prisoners in the public security station he was forced to clean during his stay in the camp. Before his arrest, he watched from his house as three civilians were killed. A uniformed policeman shot them in the head near the town market. The prosecution showed the witness several photos of Goran Jelisic shooting a civilian in the back of his head. Gashi replied that the policeman he had seen shoot the civilians wore the same uniform.

Zupljanin’s defense had no questions for Gashi. The defense counsel of the first accused Stanisic noted that the witness had changed his statement: previously he stated that Goran Jelisic wore a military uniform. ‘I’m telling you what I saw’, Gashi replied, adding that ‘Jelisic changed uniforms, choosing whichever uniform - military or police - gave him more power at any given time’.

The defense counsel also contended that on the photo depicting Goran Jelisic the witness mistakenly identified Jelisic’s blue shirt as part of a police uniform. When a judge asked that the photo be zoomed in, it became clear that it was indeed a uniform and that Jelisic carried a police baton on his belt.

After Gashi completed his evidence, Cvijetko Ignjic took the stand. In 1993, Ignjic, a forensic technician, worked in the Brcko police station. Ignjic took part in the identification of more than 200 bodies of civilians killed from May to June 1992 in the Luka camp and in other locations in Brcko. After a forensic examination, the bodies were buried in a mass grave near the Bimeks farm on the outskirts of Brcko.