The SDS official from Kotor Varos says that as the chairman of the municipal Crisis Staff, he asked the accused Stojan Zupljanin to ‘put a stop to the arbitrary actions’ by the special troops of the Security Services Center from Banja Luka after they killed several non-Serbs in the yard of the local health care centre. They committed other crimes too 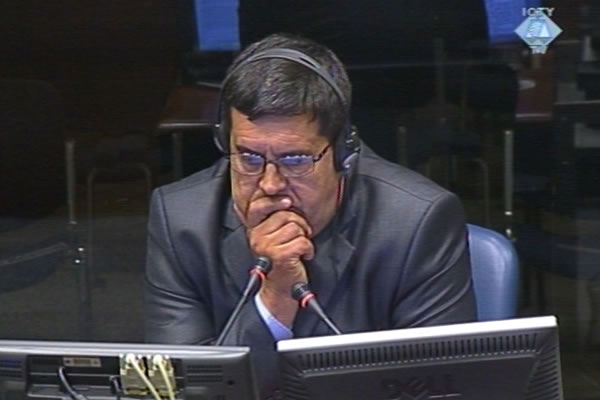 Nedeljko Đekanović, svjedok na suđenju Mići Stanišiću i Stojanu Župljaninu
Nedeljko Djekanovic, former president of the SDS municipal board in Kotor Varos, almost turned from an ‘unwilling’ to a ‘hostile witness’ at the trial of former Bosnian Serb police leaders Mico Stanisic and Stojan Zupljanin. Djekanovic was subpoenaed to come to The Hague and testify. For the best part of his evidence yesterday and today, Djekanovic avoided giving straight answers to questions asked by prosecutor Korner.

According to the minutes from the meeting on 26 June 1992, the Crisis Staff members discussed an incident where several civilians were killed in the yard of the local health center the day before by the special police from Banja Luka. The murder is listed among crimes in the appendix of the indictment against Stanisic and Zupljanin. After that meeting, the witness asked the accused Zupljanin, who was chief of the Security Services Center in Banja Luka, to ‘put a stop to arbitrary actions of some people’. Members of the special units, Djekanovic complained to Zupljanin, looted houses and drove cars that had been left behind to Banja Luka.

Despite the complaints about the conduct of the CSB special unit, its members were not withdrawn from Kotor Varos. The witness agreed with this claim after he was shown the minutes from a meeting of the Crisis Staff in July 1992, when complaints were made about the actions of the special forces.

As his testimony proceeded, Djekanovic denied he had ever heard the screams of prisoners who were being beaten in the police station located near to his office. Djekanovic continues his evidence tomorrow.