DEFENSE POINTS OUT TO ‘PROSECUTION OMISSIONS’

In their closing arguments delivered at the Srebrenica Seven trial, the defense counsel of Drago Nikolic and Ljubomir Borovcanin have pointed out that the prosecution has misrepresented the role of their clients in the Srebrenica crimes and covered up some potentially exculpatory evidence 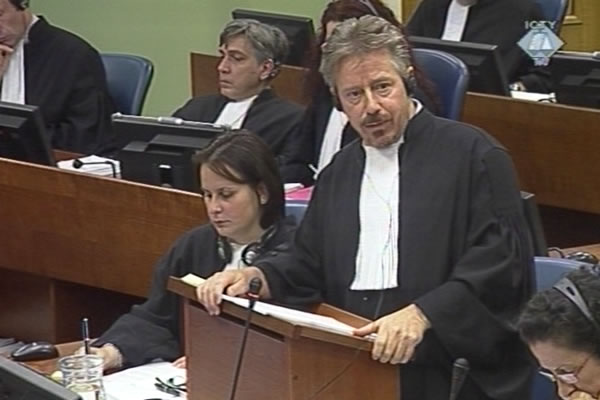 Stephan Bourgone, defence layer of Drago Nikolić
Drago Nikolic didn’t participate in the VRS Srebrenica Operation in the way the prosecution had described; he was not the man the prosecution wants to present him, Jelena Nikolic, defending the former chief of the Zvornik Brigade security, stated in her closing argument.

Nikolic quoted what the prosecution had said, that seven Bosnian Serb military and police Serbs were in the dock because they ‘had ignored their duty, failed to prevent crimes and to help the victims and deliberately chose to take part in the crime’. According to the defense, the prosecution failed to prove that Drago Nikolic neglected his duty; furthermore, he couldn’t be accused of failing to prevent crimes because he is not charged under command responsibility. Finally, Drago Nikolic didn’t make a conscious decision to take part: in the defense’s view, he was ‘thrown into the wringer of [Srebrenica] events and nobody asked him what he wanted’.

[IMAGE]4303[/IMAGE]The defense of Ljubomir Borovcanin, commander of the joint police forces deployed in the Srebrenica Operation, rejected the prosecution’s allegation that on 13 July 1995 – when he passed by the warehouse in Kravica accompanied by Belgrade journalist Zoran Petrovic – Borovcanin knew that the Bosniaks detained in the warehouse were to be executed. The footage taken by the Belgrade journalist from the car as they passed by the warehouse, the key evidence for the prosecution – was not enough to conclude that Borovcanin knew in advance about the killings or that he was present during the executions.

Moreover, the defense went on, Borovcanin in fact handed the recording to the OTP investigators when they interviewed him in 2002. The prosecution on the other hand didn’t disclose the photos of the warehouse in Kravica until the very end of the trial, the defense contends. Some of those photos were exculpatory evidence for Borovcanin. As the defense maintained, the massacre was committed hours after Borovcanin passed through Kravica.