The prosecution goes on with its closing argument at the trial of seven Bosnian Serb military and police officers. The prosecution claims it has proven beyond reasonable doubt the crime of genocide and the responsibility of the five accused who are charged with it 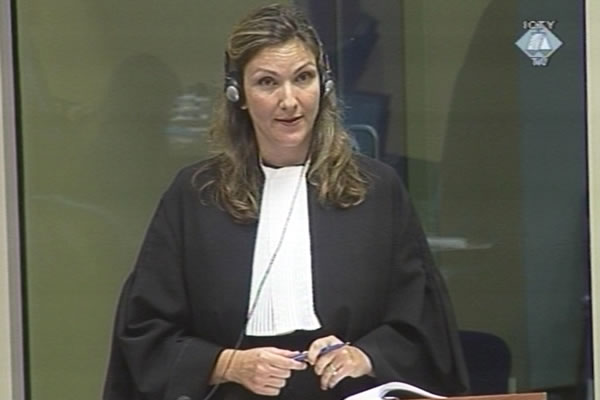 Lada Šoljan, tužilac na suđenju sedmorici oficira vojske i policije bosanskih Srba, optuženih za zločine u Srebrenici
‘The prosecution has proven beyond reasonable doubt that the five accused officers – Vujadin Popovic, Ljubisa Beara, Ljubomir Borovcanin, Drago Nikolic and Vinko Pandurevic – are responsible for genocide against the Muslim population in Eastern Bosnia’, prosecutor Lada Soljan said as the prosecution continued its closing argument at the trial for crimes in Srebrenica and Zepa. Yesterday, the prosecution spoke about the responsibility of Radivoje Miletic and Milan Gvero, members of the VRS Main Staff. Miletic and Gvero face charges of crimes against humanity and violations of laws and customs of war and are not indicted for genocide.

The prosecution contends that it has managed to prove that the Republika Srpska Army and the police murdered more than 7,000 men, inflicted grave physical and mental suffering on victims and their families and created conditions leading to the physical annihilation of the Muslim population in that area, which was their goal. 6,611 victims exhumed from the Srebrenica mass graves have been identified so far, the prosecution noted.

The prosecution today presented arguments on the responsibility of the three of the accused – former security chief in the VRS Main Staff Ljubisa Beara, security chief of the Drina Corps Vujadin Popovic and security officer in the Zvornik Brigade Drago Nikolic. The prosecution asked the Trial Chamber to convict them on all the counts in the indictment.

The prosecution rejected the claim of Ljubisa Beara’s defense that the accused didn’t know about the crimes after the fall of Srebrenica in July 1995. Even if his alibi defense were accepted, as the security officer in the VRS Main Staff Beara had to be informed about everything going on those days in the area of Bratunac and Zvornik, including the thousands of Bosniaks being detained and executed, prosecutor Kweke Vanderpuye maintained. Beara’s defense claimed that he had been in Belgrade from 13 to 16 July 1995.

Describing the evidence about the alibi of the accused as unreliable, the prosecution compared it with the testimonies of 14 prosecution witnesses. They identified Beara and put him in places where prisoners were either detained or executed on days when he was allegedly in Belgrade. The prosecution also contested the defense’s claims that those testimonies were ‘fabricated’ and that Beara was ‘chosen as a scapegoat’, stressing that the presence of the accused in the Srebrenica area and his participation in the crimes are confirmed by other evidence, such as for instance the intercepts.

According to the prosecution evidence, Vujadin Popovic was present at almost all the execution sites in Srebrenica, coordinating together with Beara and Drago Nikolic the operation to kill and forcibly transfer the population of Srebrenica and Zepa. Popovic’s duty was to make sure that the liquidation of men and youths proceeded efficiently and quietly; at the same time, he provided the resources to complete the operation and keep it secret.

Drago Nikolic’s defense case, that his responsibility was diminished because he, as a low ranking officer, had acted on his superior’ orders, is not viable, prosecutor Christopher Mitchell contended. Drago Nikolic was not obliged to commit crimes nor was he forced to act according to those orders. It was Nikolic’s duty to resist those orders, yet he decided to obey them instead, deliberately committing all the acts he was charged with.