Professor Radmilo Marojevic has done a linguistic analysis of two combat reports drafted by Vinko Pandurevic, former Zvornik Brigade commander, for his defense. He followed it up with his theory, albeit not an entirely original one, on how ‘Serbs were trapped into committing genocide’ in July 1995 in Srebrenica 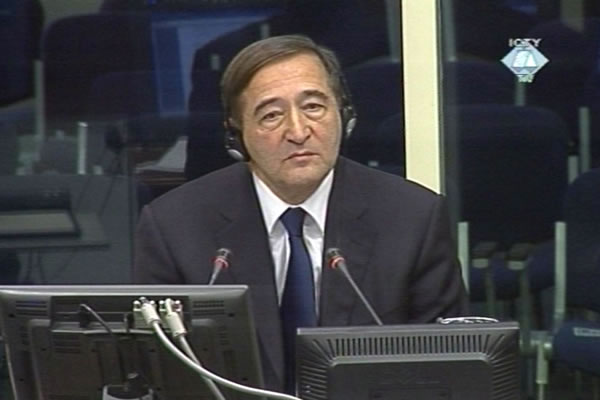 Radmilo Marojević, svjedok odbrane Vinka Pandurevića
The defense case at the trial of seven Bosnian Serb military and police officers charged with crimes in Srebrenica and Zepa was completed with the evidence of Radmilo Marojevic, professor of Slavic studies and former dean of the Faculty of Philology in Belgrade. The defense of Vinko Pandurevic called professor Marojevic as its linguistic expert.

The defense counsel of the former Zvornik Brigade commander asked the Belgrade professor to draft a linguistic analysis of Pandurevic’s combat reports of 15 and 16 July 1995 to clarify the dilemmas surrounding the parts of the reports which are interpreted differently by the prosecution and the defense. Instead of distinguishing between the meaning of the term ‘let go’ (prisoners of war) and ‘secure the terrain’ (as part of the clean-up operation), professor Marojevic in his evidence offered a peculiar, albeit not quite original, theory about what had happened in Srebrenica in July 1995 and why.

The witness admittedly ‘didn’t know much’ about the events in Srebrenica in the summer of 1995, yet, as he put it, ‘I know very well what the new world order is’ and that the ‘scenario’ for Srebrenica was prepared in 1995 by US president Clinton and Bosnian Muslim leader Izetbegovic. Serbs, the witness maintained, ‘were trapped into committing genocide’. In his opinion, it is strange that Clinton never ended up in the dock as an accomplice.

The new world order, the linguistic expert contends, ‘invented the term Bosniaks’ for an ethnic group in BH that, as he believes, is ‘of the same Serb ethnicity’. This nation consists of people practicing different religions – Orthodox, Catholic and Muslims. They speak the same Serbian language with ‘the ijekavian or ekavian pronunciation’. Professor Marojevic also explained that he had agreed to draft this expert report in order to defend Serbian language which is also on trial in The Hague.

The only cross-examination of Pandurevic’s expert came from Ljubisa Beara’s defense counsel. He told the witness at the beginning that he disagreed with ‘the political beliefs you expressed during your evidence’ and noted that the witness was a member of Seselj’s Serbian Radical Party. Marojevic didn’t deny this. He never denied the fact that when he was appointed dean of the Faculty of Philology in Belgrade – on Seselj’s initiative – he fired lecturers who opposed the implementation of Milosevic’s new Law on the University.

In the end, Beara’s defense counsel contested the validity of Marojevic’s report, noting that the Belgrade professor was not competent enough because he had no experience as an expert. The prosecution asked just one question and completed its cross-examination when the witness said that while drafting his expert report he didn’t take into consideration any testimony, not even that of the convicted general Krstic and Radovan Radinovic, military expert of Krstic’s defense.

The prosecution sought leave to present rebuttal evidence to refute the defense case and the Trial Chamber will deliver its decision on the motion as soon as possible.