General Slobodan Praljak has challenged the prosecution claims that in the second half of 1993 he told HVO units in the Vares area ‘they should show no mercy to anyone’. The message, he has claimed, concerned the disobedient HVO soldiers. What Praljak actually meant was that all those who break the law should be treated harshly, ‘with complete impartiality’ 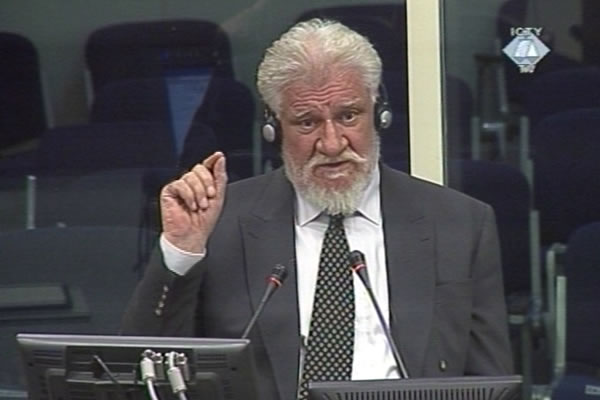 Slobodan Praljak svjedoči u svoju odbranu
General Slobodan Praljak claims he never issued an order to HVO units in the Vares area to ‘show no mercy to anyone’. According to the prosecution, after Praljak issued the order, the HVO attacked Stupni Do, killing 37 Muslim men, women and children on 23 October 1993.

As he continued his examination of the accused Praljak, presiding judge Antonetti showed him a document drawn by the duty operations officer in the Ban Josip Jelacic Brigade on 24 October 1993, tendered into evidence by the prosecution at the trial of former Herceg Bosna leaders. The document, addressed to the Bobovac Brigade and HVO commander Ivica Rajic, states that Praljak said ‘not to show mercy to anyone’.

‘I didn’t write anything to Rajic and the Bobovac Brigade,’ Praljak said, explaining that he had in fact written to his then deputy, Milivoj Petkovic. When he said, ‘show no mercy to anyone’, he had in mind the disorder that reigned in HVO ranks in Vares, not the Muslim civilians. What he meant was that those who break the law should be treated harshly, ‘with complete impartiality’.

Praljak went on to say that the original message, not shown in court today, clearly shows his message was sent to Petkovic, not Rajic, and that the context clearly shows this concerned HVO soldiers.

In addition to the documents tendered by the prosecution, Rajic’s guilty plea to the HVO crime in Stupni Do also incriminates Praljak. Rajic was sentenced to 12 years in prison. In his plea agreement, he claims that on 21 October 1993, Petkovic ordered him to ‘take control over the situation in and around Vares’. Praljak's ‘no mercy’ order followed, Rajic said.

The presiding judge indicated his examination of the accused Praljak was reaching an end. Praljak has been testifying in his own defense since early May. The defense of the first accused Jadranko Prlic might begin its cross-examination tomorrow.