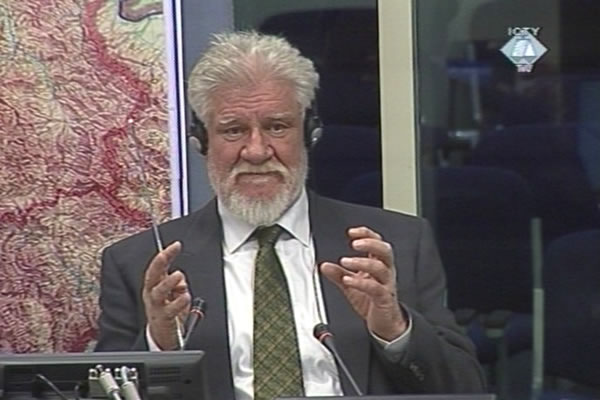 Slobodan Praljak svjedoči u svoju odbranu
In his analysis of texts published in the magazine Croatian Soldier, official journal of the Defense Ministry in the Republic of Croatia, General Slobodan Praljak defended the policy pursued by Croatian president Franjo Tudjman and defense minister Gojko Susak during the war towards Bosnia and Herzegovina.

According to the indictment, Tudjman, Susak and some other Croatian officials – including the HV Main Staff commander Janko Bobetko – headed the joint criminal enterprise aimed at annexing Herceg Bosna to Croatia. As alleged by the prosecution, General Praljak who was the commander of the HVO Main Staff at the time, and other accused Bosnian Croat leaders were members of that joint criminal enterprise.

‘I didn’t receive orders from Tudjman and Susak’, Praljak replied when French judge Antonetti asked him if he had received instructions on combat operations in the Herceg Bosna territory from July to November 1993. Praljak once again said that he could not understand how anybody could believe that Tudjman would even think about annexing parts of BH. According to Praljak, Tudjman’s position towards BH was extremely peaceful and friendly.

Herceg Bosna, in Praljak’s words, was ‘a temporary solution of a group of municipalities to organize the defense’ against the attacks by the Serb forces. As soon as the international community tabled a peace solution, Praljak noted, everybody renounced Herceg Bosna. In Tudjman’s defense the accused recounted that during the war there was a slogan, ‘take his pen away’ in Croatia because the president ‘was too quick to sign’ everything offered by the international community.

Praljak used a number of articles from the Croatian Soldier, often under Davor Butkovic’s byline – Butkovic is now the editor of the Jutarnji List newspaper – and a video clip from a TV program broadcast on Croatian TV in the second half of 1992 to illustrate his claim that ‘volunteers’ fought in BH. Praljak and Gojko Susak were guests in the studio for the program. Former Croatian defense minister said that ‘only volunteers’ went to the battlefields in BH because nobody could order those who didn’t want to go to do it and fight in another country, BH.

One of the documents Praljak’s defense brought up refers to the departure of a group of 300 to 400 HV volunteers to BH in mid-1992. The document orders them not to wear HV insignia while they are in the BH territory. According to Praljak, this proves that the Croatian soldiers went to BH to fight as volunteers.

Judge Prandler noted that the order could be interpreted differently, that Croatia wanted to hide the presence of its troops sent to the territory of other country. Praljak disagreed with this interpretation by the Hungarian judge.