The prosecution has today called additional evidence at the trial of Bosnian Serb military and police officers. Former member of the Zvornik Brigade stated that ‘about ten days after the fall of Srebrenica’ Vujadin Popovic was present when captured Bosniaks were executed. Popovic ordered them to be buried 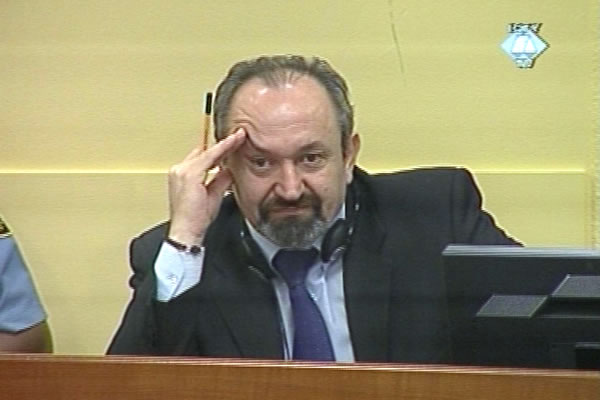 Vujadin Popovic in the courtroom
The defense case has been suspended today to allow the prosecution to call two more witnesses as part of its case. The Trial Chamber has granted leave for this additional evidence to be called. Through the testimony of the two witnesses the prosecution wants to present new evidence on the direct involvement of Vujadin Popovic in the mass execution of Muslim captives in Bisina near Sekovic in Eastern Bosnia.

Witness PW 172, former member of the VRS, testifying with full protective measures, with his identity, face and voice concealed from the public, recounted that he and two other soldiers were involved in the transportation of the prisoners from the Susica prison near Vlasenica about ten days after the fall of Srebrenica in July 1995. The witness was told that the prisoners ‘are taken to be exchanged’. On the road towards Sekovici the convoy with ‘two trucks and one car’ took a turn towards Bisina on a ‘macadam road’. It stopped on the spot where some soldiers were standing by two cars.

One of the cars belonged to Vujadin Popovic, chief of security in the VRS Drina Corps. Five other soldiers with the insignia of the 10th Sabotage Detachment took five prisoners out of the truck and led them to a spot some 30 meters away from the road. After that, the witness said, shots were heard and he ‘realized that this was no road to an exchange’. As the witness put it, he was shocked.

The execution continued; prisoners were brought in five by five. When the killing finished, the witness came to Vujadin Popovic and asked him ‘Pope, what is this’. There was no reply, but the witness contends he ‘saw tears in Popovic’s eyes’. Very soon a machine arrived at the execution site and dug the grave for the victims. Popovic asked the witness and two soldiers who were with him to move the bodies to the pit ‘if they can’. The witness refused to do it; he was not sanctioned in any way for his disobedience.

In the cross-examination, Popovic’s defense counsel put it to the witness that former Drina Corps security officer ‘did not participate in any way in the transport of the prisoners’ and that he ‘was not present when they were executed’. The witness agreed with the first claim but remained adamant that ‘Popovic attended the execution’.

The execution in Bisina is not listed in the indictment against the seven Bosnian military and police officers. However, according to the judges, it is relevant for Popovic’s ‘knowledge, intention and pattern of behavior’ during the period relevant for the indictment and in particular for the alleged participation in the joint criminal enterprise. The Trial Chamber nevertheless emphasized in its order granting the prosecution leave to call additional evidence that the seven accused ‘cannot be found guilty of the execution in Bisina’.