In his statement delivered without making the solemn declaration, former chief of the VJ General Staff Momcilo Perisic says his indictment is ‘unique in the history of international law of war’. ‘Never before have commanders and chiefs of General Staff been held criminally responsible for crimes committed by the armed forces of another state or entity’, General Perisic says 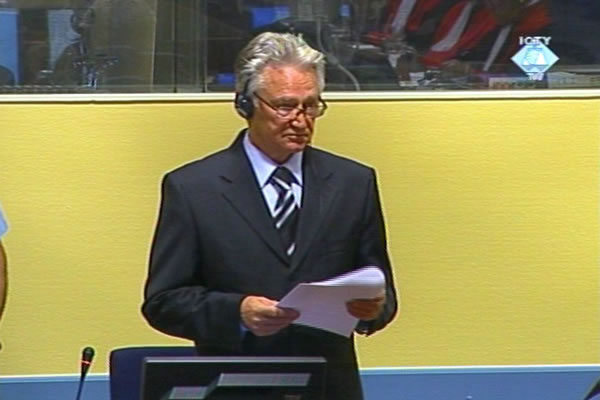 Momčilo Perišić u sudnici Tribunala
In his statement delivered without making the solemn declaration at the beginning of his trial, Momcilo Perisic, former chief of the VJ General Staff, described the indictment against him as ‘unique in the history of international law of war’. ‘Never before have commanders and chiefs of General Staff been held criminally responsible for crimes committed by the armed forces of another state or entity’, Perisic said.

Momcilo Perisic is charged with providing personnel, material and logistic support to the VRS and the SVK troops for the crimes they committed in Srebrenica, in the shelling of Sarajevo and the rocket attacks on Zagreb.

In a statement, Perisic described his family background and military career; ‘I spent 80 percent of my service on duties in Croatia, Bosnia and Montenegro, not in the republic where I was born’, he said. In August 1993 when he was appointed the chief of the General Staff, Perisic said, he was ‘able to recognize interests of citizens and of the state; I was ready to commit everything I had, including my life to protect them’. He was also able to see when ‘the regime put its personal interest before the interests of the state’, Perisic noted. This is why, Perisic concluded, ‘the spill-over of the war into the FRY and the misuse of the VJ were prevented, democracy could develop and the VJ was transformed into the most respected institution in the FRY’.

As Perisic explained, he tried to ‘exert influence on the regime while avoiding a military coup’. When he realized that the ‘decisions of the governing regime were leading to a conflict with NATO’, Perisic ‘went public and said what was in store for Yugoslavia’. Perisic was then removed from office in November 1998; in March 1999 he was discharged from the VJ. Later, after he founded the Movement for a Democratic Serbia, he was stripped of his rank. Describing his role in the events of 5 October 2000 in Serbia, Perisic described himself as ‘a key person in the planning and implementation of the activities designed to give creative shape to the energy of millions of protesters’, whatever this might mean.

When he received the indictment on 2 March 2005 Perisic decided to go to The Hague as his conscience dictated, because ‘crimes have no nationality and whoever committed them has to be punished’. He deeply regrets the crimes that were committed because every life lost is irreplaceable’. Perisic concluded by saying he was sure the Trial Chamber will ‘hear the arguments of both sides without prejudice and deliver a fair and honorable judgment’.